Bill and Hillary in their youth… 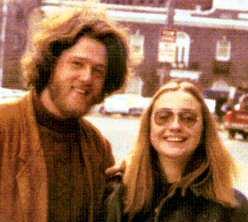 Before Hillary had her work done(?)

First it was the sad attacks by blissful Elizabeth Edwards earlier this week on Hillary’s not so bubbly disposition.

Now, Hillary’s Republican opponent, John Spencer, in an off the record conversation with a reporter, claims that Hillary was ugly before she pumped “millions of dollars” into a remake.
The Daily News reports:

Hillary Clinton’s Republican challenger is getting personal and it’s not pretty: He says the senator used to be ugly – and speculates she got “millions of dollars” in plastic surgery.

“You ever see a picture of her back then? Whew,” said John Spencer of Clinton’s younger days.

“I don’t know why Bill married her,” he said of the Clintons, who celebrated their 31st anniversary this month.

Noting Hillary Clinton looks much different now, he chalked it up to “millions of dollars” of “work” – plastic surgery.

“She looks good now,” he said.

Spencer’s bizarre comments came during a conversation with a reporter seated beside him and his wife, Kathy, on the 10:30 a.m. JetBlue flight Friday to Rochester, the site of the race’s first debate.

In what has become a familiar stance for the senator over the years, Hillary denied the charges.

Update: John Spencer later today said that his comments were taken out of context.