Donald “Skip” Conover, cofounder and vice chairman of the international health care company CBay Inc., is a star on the Islamic TV channel. 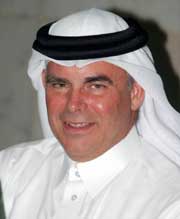 Skip likes to wear Muslim dress when traveling to the Kingdom.

The New York Sun exposes a new radical Islamic television channel Bridges TV that is expanding its reach in the United States. (Via Charles Johnson)

Bridges TV’s Web site, bridgestv.com, features a weekly poll. Notable questions and results include 59% calling for Hezbollah to continue as a military force in Lebanon, 73% in agreement with the American policy of withholding funds to the Hamas-led Palestinian Arab government, and 63% believing that the Iranian government’s nuclear program is for peaceful purposes.

One of the stars of Bridges TV is a cofounder and vice chairman of the international health care company CBay Inc., Donald “Skip” Conover, who hosts and produces a show called “Words Matter.” He was the subject of a gushing article in the Saudi daily Arab News on September 27.

In the article, Mr. Conover expressed “his disgust” at what he called inflammatory statements about Arabs and Muslims in the press.

Bridges TV claims that its “major purpose” is “to build bridges between American Muslims and other Americans.” After viewing the channel, I find this highly unlikely.

And, here are few words from Conover’s article at Saudi Arabia News:

The Muslims have at least a million votes in the United States. Those people, as I understand, voted entirely for Bush in 2000 because Al Gore had Joe Lieberman, the senator from Connecticut, as his running mate. Muslims just didn’t trust him because he was Jewish. They thought he would be in lockstep with Israel.

Well, I have news for you. Every American politician is in lockstep with Israel — including Arab-American politicians. There are six members of the US Congress who are Arab-Americans, but when there was a vote on behalf of Israel in July during the Israel-Hezbollah war, the vote was unanimously passed. I don’t know whether they voted for the resolution, but I do know they didn’t vote against the resolution. Either they didn’t show up or they voted in favor or they abstained. But any of those means that they are under the thumb of the Jewish lobby. They are afraid to vote against because if they vote against, then the Jewish lobby will put a lot of money behind the candidate against them in their districts in the future. I have news for the Muslim community. All American politicians are in the pocket of the Jewish lobby today because they control a lot of money, and they spend a lot of money in politics.”

Every Muslim in the Middle East who has a relative in the US should get the message across to their relatives. They need to make sure that all their friends vote against Bush. And if they do that by word of mouth, whether or not there is a good organizing group in the US, it will have an effect. The thing is minority groups often think that they do not have any power, but the truth is that because the rest of us are so evenly balanced, they have all the power. The vote has to come out in order for these elections to slow down the president.”

Conover worries that an unrestrained Bush administration will set its sights on Iran. “A lot of people speculate that the president has in mind attacking Iran, which I think would be a horrible idea,” he said. “If both Houses of Congress are still Republican, he knows it will be difficult to stop him, but if at least one House of Congress is against such a war then it will be a lot harder for him.”

The Jawa Report has more on why jihadists all over the world are praying to Allah for a democratic win.