Since certain Western news organizations decided to air jihadist snuff films in their reports from Iraq, this story may have been missed. 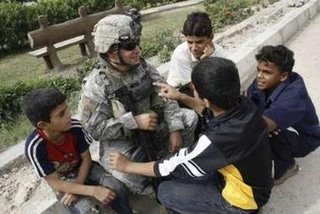 Boys talk to a U.S. soldier from 172nd Stryker Brigade Combat Team at a checkpoint in Baghdad, October 29, 2006. (REUTERS/Mohammed Ameen)

The following is a Haider Ajina translation of a head line and article which appeared in Iraqi News Agency October 29, 2006

This incident proves the national unity of most Iraqis while turning a blind eye to their sect or origin.

The cooperation and comradeship amongst Sunni & Shiite displayed here is very similar to the Iraq I grew up in the 60’s and 70’s before Saddam came to power.

Incidences such as these (Sunni & Shiite helping each other) happen frequently in Iraq. They go unreported in the Western media (see CNN). It is mostly the former Baathists and Alqaida and some Shiite militia who are creating the sectarian strife in Iraq. The foreign influences of Iran and Syria especially fund and aid the strife. Criminal gangs or militia, who can be Sunni or Shiite, are trying to ignite fighting amongst Tribes in Iraq. I could not find further details about these criminals who tried to get Aljuhaishat and Alkufaifan to fight each other. Gladly, cooler heads prevailed and the truth came out.