The leaders of Iraq’s Muslim Community sign a convention for peace in Mecca.

What is amazing about this news is that once again the people of Iraq tell the world that they want to remain one united nation. This seems to get missed a lot on both sides of the aisle. 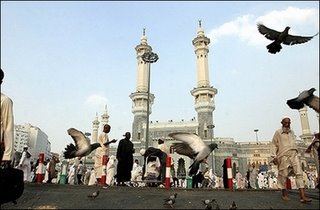 The following is a Haider Ajina translation of a headline and article from Iraq’s Aswat Al-Iraq on October 20, 2006.

Amongst the dignitaries attending the signing of this covenant, is president of the Sunni Accord Ahmed Abdulghafoor Alsameraai and president of the Shiite Accord Adnan Alhaideri and Sheik Mohamed Mahmood Alsumed member of “Muslim Scholars Association” (Sunni organization) and Sheik Sader Aldien Kubanchi member of “Supreme Council of Islamic Revelation in Iraq” SCIRI (Shiite organization). It was noted that a representative of Alsistani and Muqtada Alsadar did not attend. However, they did send their endorsements of the covenant and its contents.

Most Iraqis have consistently supported the formation a unity government. 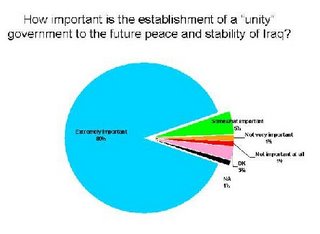 Over 90% of Iraqis support a strong unity government according to the latest International Republican Institute June 14-24, 2006 Iraqi Survey

These type of conferences and compact and covenants have been happening for a while but none at this large a scale and this strong an attendance and endorsements. Time will tell if this may lead the way to reducing or even stopping the violence and killing going on in central Iraq.

Arab Sunnis (not Kurd Sunnis) are being killed as revenge for the years of killing and abuse the Shiites suffered under the Baathists (who were mostly Arab Sunni). Shiites are being killed by Sunni Alqaida and former Baathists (Saddam’s no. 2 man is hiding in Saudi Arabia and directing attacks in Iraq from their, using the vast money Baathists stole from the Iraqi treasury) to destabilize the country. Then we have Iran financing Shiite Militias. Syria is supporting the former Baathists and Alqaida to destabilize Iraq.

Iran and Syria are doing this to try to bring us to the table and talk directly with them. This would make Iran and Syria appear important and influential. They want to be talking face to face with a super power to help the super power resolve the situation in Iraq. They would also like to keep us occupied in Iraq. Syria just yesterday announced that it is willing to mediate since it has means to influence matters in Iraq. I think this a very interesting statement, since Syria has maintained the fact that it is not supporting, nor that can it influence, terrorists in Iraq.

Iran also announced that it is willing to help stabilize Iraq but did not say it could influence any one. Also an interesting statement. Violence in central Iraq is escalating not just because of Ramadan it is escalating to try to influence our elections and test our resolve. The Arab street often maintains that America is not willing to sacrifice and thus can be waited out easily and will take the easy way out. They influenced the election In Spain in 2004 and soon afterward, Spain pulled their troops out of Iraq.

Jim Hoft
Jim Hoft is the founder and editor of The Gateway Pundit, one of the top conservative news outlets in America. Jim was awarded the Reed Irvine Accuracy in Media Award in 2013 and is the proud recipient of the Breitbart Award for Excellence in Online Journalism from the Americans for Prosperity Foundation in May 2016.
"They Should Just Be a Weather Channel" - Mike Lindell RIPS FOX News and Announces CNN Will Likely Air His Cyber Symposium Ads (VIDEO)
Rep. Matt Gaetz Implies that Our Own Government Was Behind Jan. 6 False Flag -- Demands Release of 14,000 hrs. of Hidden Video (VIDEO)
More Insanity: Goofy Surgeon General Vivek Murthy Says Vaccinated People Need to Wear Masks to Protect Unvaccinated People
VIDEO: Joe Biden Locks Up Minorities for Smoking Crack -- But Not His Son Hunter
MyPillow Founder Mike Lindell Pulls Ads from FOX News After Network Refuses to Run Ads for His August Symposium
See more...