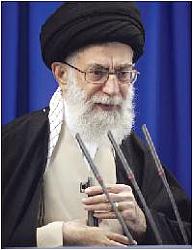 Serendip points out this sermon shot that was posted at DEBKA Files this weekend:

This shot, suppressed in Iran’s media coverage, shows Khamenei speaking at Tehran University on Oct. 13, the third Friday of Ramadan holding an automatic AK 47 rifle in a pose reminiscent of Yasser Arafat and Saddam Hussein. His sermon was tantamount to a declaration of war by Iran and its Middle East allies: Syria, Hizballah and the Palestinian Hamas against the United States and Israel.

DEBKA Files claims that Iran and its allies are readying themselves for an attack on the US:

1. They pointed up the tradition initiated by the father of the Islamic Revolution Ayatollah Ruhollah Khomeini of marking the last Friday of Ramadan as International al Qods Day – “Jerusalem Liberation Day.”

2. Khamenei’s aides leaked word that his decision to hold the sermon of Oct. 13 was prompted by his discovery that the USS Eisenhower Carrier Strike Group was heading for the Persian Gulf and would be deployed in operational mode opposite Iran’s shores by Oct. 21.

Military circles in the United States and Israel interpret these steps as meaning that Iran will be standing by in battle positions the day before the Eisenhower reaches its destination. DEBKAfile and DEBKA-Net-Weekly’s military sources have been reporting since late August that Iran’s political and military leaders have resolved not to wait passively for an American attack but to go instead for a pre-emptive strike against US forces in the Persian Gulf and Iraq, as well as targeting Israel.

Wow! And, the Iranian New Service has this from the the radical President Ahmadinejad:

Ahmadinejad pointed to Palestine as the front line of Muslim Ummah in the campaign against bullying powers, adding that Iran is ready to transfer its experiences and achievements in various fields to the popular Hamas government.

For his part, Seyam said that all Muslims are credited with the victory of every Islamic state and said, “Muslims across the world hould take pride in the victory of Islamic resistance in Lebanon, that of the popular Hamas government in Palestine and remarkable success of Iran in various domains.”