We already know how Iran feels about Hezbollah… 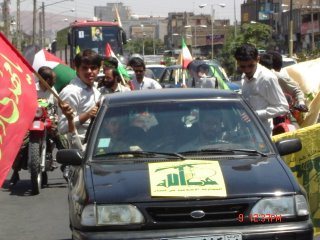 A bus takes off from Tehran filled with Iranian martyrs to assist Hezbollah fighters in Lebanon in their battle against Israel this summer.
(What ever happened to these suicide buses?)

Iran and Hezbollah, Hamas and the Mahdi Army- all in the news today.

Iran News is reporting that Iran is giving the Mahdi army millions of dollars in order to dominate Iraq:

Iran has transferred millions of dollars as well as weapons and expertise to Iraq’s Mahdi Army.

Officials said the Mahdi Army has become a leading Iranian surrogate in Iraq. They said Mahdi fighters have been trained and equipped in Iran in a move meant to avoid deployment of Iran’s Islamic Revolutionary Guard Corps soldiers in Iraq.

“We’re having to block Shi’ite extremists from linking with Iran.” Maj. Gen. Richard Zahner, deputy chief of staff of intelligence for Multinational Forces in Iraq, said.

Zahner told a briefing on Sept. 27 that Iran has sought to dominate Iraq. He said Iran has been developing the Mahdi Army as well as splinter groups that no longer came under the umbrella of Shi’ite cleric Moqtada Sadr.

And, Turkish media is reporting that Hamas may send fighters to Iran to be trained by the regime:

Hamas representatives were in Teheran on Thursday discussing the possibility of training its operatives in Iran, Channel 2 reported.

Following PA elections earlier this year, Hamas reportedly asked Iran for guidance, instructions and financial assistance as it prepared to take over the Palestinian government.

“Hamas is currently trying to obtain funding from Iran and has asked the Iranians for advice on how they think Hamas should lead the PA,” then-defense minister Shaul Mofaz told EU Foreign Policy Chief Javier Solana at the time.

In 1999, the IDF claimed Iran had been training Hamas guerrillas near Teheran for several years to carry out attacks on Israel, after a military court indicted two Hamas members from Gaza for carrying out illegal activities for the movement that included initiating Iranian training.

And… the Supreme Leader in Iran, Ayatollah Seyyed Ali Khamenei, today devoted his entire Friday sermon to the Hezbollah’s 34 day war with Israel.