I stand with Nancy Pelosi…
It’s time to clean up the swamp!

Harry has a certain frankness about him.
I like that.
(17 seconds)

In the process, Reid did not disclose to Congress an earlier sale in which he transferred his land to a company created by a friend and took a financial stake in that company, according to records and interviews.

The deal began in 1998 when Reid bought undeveloped residential property on Las Vegas’ booming outskirts for about $400,000. Reid bought one lot outright, and a second parcel jointly with Brown. One of the sellers was a developer who was benefiting from a government land swap that Reid supported. The seller never talked to Reid.

In 2001, Reid sold the land for the same price to a limited liability corporation created by Brown. The senator didn’t disclose the sale on his annual public ethics report or tell Congress he had any stake in Brown’s company. He continued to report to Congress that he personally owned the land.

After getting local officials to rezone the property for a shopping center, Brown’s company sold the land in 2004 to other developers and Reid took $1.1 million of the proceeds, nearly tripling the senator’s investment. Reid reported it to Congress as a personal land sale.

A sexy scandal? No… Not unless you think money is sexy. 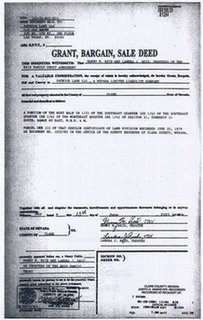 This image of a deed provided by the Clark County (Nev.) Recorder, shows a June 13, 2001, deed with Senate Democratic Leader Harry Reid’s signature for a sale of land to a limited liability corporation created by Jay Brown, a longtime friend and former casino lawyer. Reid did not disclose the sale on his annual public ethics report or tell Congress he had any stake in Brown’s company. He continued to report to Congress that he personally owned the land. (AP Photo)

Not a bad haul, Harry!

Captain’s Quarters explains the severity of these corruption charges:

Now we have the Democratic caucus leader dodging disclosures and failing to disclose $800,000 in profits from a project on which he partnered with a lawyer suspected of connections to organized crime and a bribery scandal. And let’s not forget Reid’s connections to Jack Abramoff, whom Democrats tried mightily to use as a poster boy for Republican-only graft.

Dan Riehl recalls images of Harry ringside.
Hat Tip Larywn
Sweetness and Light has a picture that sums it all up.