In early September Hamid Mir, the only person who has interviewed both Osama bin Laden and his second in command Ayman al Zawahiri since 9-11, reported that Al Qaeda was planning a nuclear attack inside the United States during Ramadan (September 24-October 23).

Today, Hamid Mir said that the Atta video was the signal to operatives to go ahead with the planned terror strike! 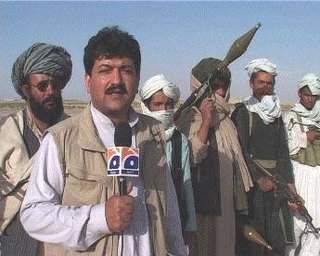 Hamid Mir says that Al Qaeda completed its “cycle of warnings” and today’s Atta video is the signal for terrorists to strike! (HAMID MIR)

The Jawa Report posted this interview of Hamid Mir on the Glenn Beck Radio Show back on September 20.
This is what Hamid Mir said two weeks ago:

Reports that he was told that the terrorists working to carry out this attack are not using Muslim names, they are hiding behind Western sounding names and related documents, such as passports.

There is no timeframe for any attacks, inside U.S. or Afghanistan. Backs up 300 suicide bomber claim by saying that shortly after he returned to Pakistan, suicide attacks began in Afghanistan, which is true.

Say’s that Osama has completed the “cycle of warnings.” Under Islamic law, the defender is given three warnings before being attacked. Says that Osama is trying to legitimize his actions with Islamic scholars who criticized him for 9/11.
Doesn’t believe they’re bluffing. Said in earlier interviews with Osama, he didn’t believe he’d ever strike America. He was proven wrong.

Once again says “very dangerous materials” have been smuggled over the border. Doesn’t specify what.

HotAir posted the audio from the radio interview.

Hamid Mir also discussed Al Qaeda’s nuclear arsenal during an interview with the Canada Free Press back in May:

RM: It has been reported that you believe Al-Qaeda has nuclear weapons. How did you come up with this conclusion?

HM: I came up with this conclusion after eight years of investigation and research in the remote mountain areas of Afghanistan and Pakistan. I traveled to Iraq, Iran, Sudan, Syria, Uzbekistan, and Russia and met dozens of people. I interviewed not only Al-Qaeda operatives but met scientists and top U.S. officials also. I will have the details in my coming book.

At least two Al-Qaeda operatives claimed that the organization smuggled suitcase nukes inside America. But I have no details on who did it. But I do have details about who smuggled uranium inside America and how.

I am very careful when speaking about Al-Qaeda’s nuclear capabilities. I’ve met many people in Al-Qaeda who have claimed that uranium and nuclear bombs were smuggled to America, and I’ll quote them in my book. However, when I speak for myself, I don’t rely on claims by Al-Qaeda. I rely upon my own investigations.

And, Clayton Cramer links to another Hamid Mir interview with Abu Dawood that is very concerning.

Today Hamid Mir said during a FOX News interview that the release of the Atta video was the signal for Al Qaeda operatives to strike!

More from FOX… “Bin Laden said a few years ago that he was saving Atta’s last testament to release for a special occasion, Venzke said.”

Sean Osborne, linked at Northeast intelligence Network, says the Zawahiri video on Friday is also indicative of planned terrorist operations in America or against American interests elsewhere in the world.

Strategy Page talks about the large amount of “chatter” going on.

I actually heard this on FOX radio first and then noticed that HotAir mentioned this news in their report yesterday.

Dinocrat has much more on Yosri Fouda, the Aljazeera writer who wrote the Times article.
Hat Tip Larwyn