A group of Everest mountaneers hoped for thrills but did not expect to witness the horrific slaughter of Tibetans by Chinese forces at the Nangpa La Pass. 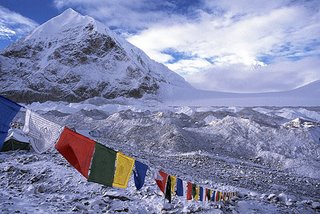 Mount Everest.net is reporting a violent slaughter of Tibetans trying to escape into Nepal by Chinese forces earlier this week. The whole episode was witnessed by two different teams of international climbers:

A reliable source close to Explorers.Web reported alarming news this morning in the middle of the Cho Oyu massive summit push.

A group of Tibetans were allegedly shot on their way to Nangpa La pass, at Nepal’s borderline; some climbers chose to evacuate ABC when it was swarmed by Chinese army after the shootout. “There is a story that happened here on the 30th and the 1st that is not being told,” writes the climber. “It is tragic, it is haunting, and it is apparently all too real for Tibetans.” Below the full report:

Early morning of September 30th, I walked out of our dining tent to gaze over towards the Nangpa La pass. I saw a line of Tibetans heading towards the start of the pass – a common sight, as the trade routes are open this time of year.

Then, without warning, shots rang out. Over, and over and over. Then the line of people started to run uphill – they were at 19,000ft. Apparently the Chinese army was tipped off about their attempted escape, and had showed up with guns.

2 people were down, and they weren’t getting up 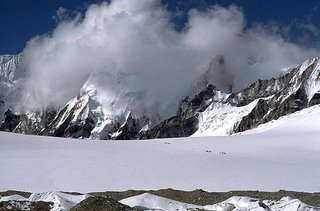 Nangpa La – “I saw a line of Tibetans heading towards the start of the pass – a common sight, as the trade routes are open this time of year.” (Phayul.com)

There was a followup report posted on Friday, October 6, 2006. A group of Filipino climbers also witnessed the massacre:

Five days back, people including children were shot at right before the eyes of a large international community of mountaineers. At least one young nun lost her life. A couple of climbers made sure the world knew.

An American climber reported straight from Cho Oyu to ExplorersWeb, “There is a story that happened here on the 30th and the 1st that is not being told,” he reported on October 2nd. His email was a horrible eye-witness report of climbers on summit push spotting Tibetan refugees getting shot while crossing Nangpa La. “Watching the line snake off thru the snow, as the shots rang out, we saw two shapes fall. The binoculars confirmed it, 2 people were down, and they weren’t getting up.”

The Philippine Daily Inquirer reports that the Filipino Cho Oyu expedition also witnessed the killing: “In a cell phone call to the Inquirer on Saturday, an emotional Dr. Ted Esguerra said he saw at least three people — two women and a man — shot dead on the Nangpa La,” says the news article. “Here I am trying to save lives. Yet I am a witness to the taking of lives,” said Esguerra, who sounded as though he were close to tears according to the Philippine Daily Inquirer .

The International Campaign for Tibet organization just released a full report stating that one victim was a Tibetan nun in her mid twenties. The girl was shot dead by Chinese border patrols while on her way into exile in Nepal.

The organization states that Forty-three Tibetans from a group of more than 70, including children as young as ten as well as Tibetans in their twenties and thirties, escaping from Tibet were apparently able to escape from the gun-fire and safely reach Nepalese territory, where they are now en route to the Tibetan Refugees Reception Center in Kathmandu. According to local sources, the Tibetans feared that there might be more than one fatality. The whereabouts of the more than 30 remaining Tibetans from the group is not known.