There are several Updates Below…

What we know now…

Radical Gay Rights Activists held on to information about Representative Foley for months and years. These “Rights Activists” knew that representative Foley had relationships with “young men less than half his age.” They did their own investigation on Foley. They even flew in their sources in to be interviewed about the Representative. They shared this information with the Democratic Congressional Campaign Committee. They held on to the information for over a year. They wrote about how they would break the story at midterm elections.

QandO Blog now has evidence that John Aravosis (the radical gay activist from AmericaBlog– “He deserves to be publicly excoriated.” 7-2004) had copies of the emails “months ago!”

This is important from Macsmind–

“However, I do know that the specific focus of the FBI at this point is to determine who knew about Foley’s activities, when they knew it and specifically who withheld evidence in what may be a Federal Crime. Yet like in many investigations, there is sometimes the uncovering of other crimes that takes place. It should be said at this point that the attempt to extort or influence, or threaten a US congressman, in order to influence legislation, or an election is a Federal Crime, and if in fact principals were involved in such an orchestrated plan it will be discovered.”

Again, I must point out that even as a constituant of former respresentitive Foley, I detest his actions, and do not condone and accept them in anyway. In fact I support his prosecution if applicable laws have been broken. But again, those who particpated before the fact in the “outing” of Foley, seem to have had at this point specific knowledge of his activities and if proven at the least are guilty of conspriracy to withhold evidence, and obstruction of justice.

Sweetness and Light reported on the Mike Rogers connection on Sunday:

Well the good news is that the Democratic Congressional Campaign Committee is finally getting it. I called their Director of Communications, Bill Burton, before the Foley story broke to let him know about Foley (and another case) were coming down the pike. While Burton promised to have someone email or return my call and didn’t, I am glad he followed up on my call and was ready on Friday to come out of the gate running.

The bad new is they are still not paying enough attention… There are others within reach… If the Democrats would only fight half as hard as the Republicans.

Thomas Lifson at The American Thinker has more.

According to Lifson, Aravosis (one of the known liberals outing gay congress people) said he obtained the latest information about the five-term congressman from Foley’s former chief of staff, Kirk Fordham.

QUESTION – Did Fordham have acccess to Foley’s IM account information, screen name and password? Very likely. Could he have passed this information onto Aravosis and Rogers? Very possible. Could some of the IMs been manufactured then by Rogers or Aravosis, those being reported by ABC. Probable.

We know someone logged onto Foley’s IM account yesterday when he was in a treatment center for 20-30 seconds, according to Fox News. Could this have been Rogers or Aravosis?

Wild Bill at Passionate America has big news he is reporting at 4:00 PM CST today.
Look for that!

** And, then there is this BOMBSHELL from Clarice…

Dick Morris just said on FOX that a respected reporter told him that she has proof that a senior democrat member of congress knew about the IMs months ago–unlike Hastert.

That would not look so good for the donkeys now would it? Especially considering the Republicans have been carpet bombed by the democrats/media the last couple of weeks!

Also, keep an eye on The Strata-Sphere.
Right Wing Nuthouse is also on the story.
HotAir on “Saving IM Messages 101.”

This could get real messy!

One other point-
ABC’s Ross made it sound like the IM’s came from a “Republican”. Mike Rogers calls himself a Republican(?) This would make sense.

World Net Daily is on the story.

Previously:
The Foley Fallout
Foley Fallout: What We Know Now
Foleygate! Altered Images! What’s Going On Here?
Foleygate: What Stunk Like a Rat, Was a Democ-Rat!
If Gay Activists & Democrats Knew of Foley, Why Were They Silent?

Update: Via Ace… Uh-Oh, Mike Rogers is sanitizing his blog!

Update 2: Salena Zito from the Pittsburgh Tribune-Review says the big news is about to hit! Strata-Sphere has the story.
Update 3: This is ugly!

First- Mike Rogers, one of the famous outers, threatening to out a senator if he did not vote a certain way. Blackmail?
This is from January , 30 of this year incase it disappears.

Now this is getting just weird!

On July 9, 2004, John Aravosis of AmericaBlog said this about Fordham:

Aravosis said he obtained the latest information about the five-term congressman from Foley’s former chief of staff, Kirk Fordham.

Fordham, who is gay, headed up fund-raising efforts for Foley’s aborted Senate campaign and is now the finance director for one of the remaining GOP primary candidates in that race: Mel Martinez, George W. Bush’s former Housing & Urban Development secretary. Martinez has come out in favor of the Federal Marriage Amendment.

Fordham denied ever speaking with Aravosis and said, “I just don’t discuss Congressman Foley’s personal life with reporters, but I’m not sure what their motive is in outing him, other than to draw attention to themselves. Foley has a good track record with gay issues and opposes the FMA.” 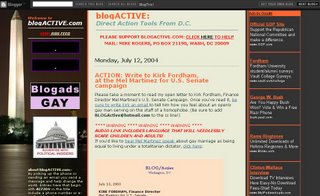 ACTION: Write to Kirk Fordham,
at the Mel Martinez for U.S. Senate campaign
Please take a moment to read my open letter to Kirk Fordham, Finance Director Mel Martinez’s U.S. Senate Campaign. Once you’ve read it, be sure to write Kirk an email to tell him how you feel about an openly gay man serving on the staff of a homophobe. (Be sure to add [email protected] to the cc line!)

And here is the letter written to Fordham: 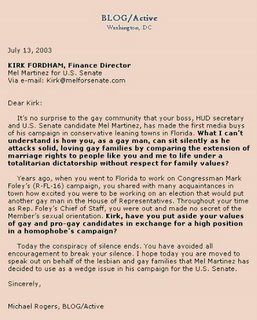 (Click to Enlarge)
This stuck out: “Today the conspiracy of silence ends. You have avoided all encouragement to break your silence. I hope today you are moved to speak out…”
Another threat, another outing by Michael Rogers.

More attacks on Kirk Fordham at BlogActive on April 7, 2005:

All of this reminds me of a letter I wrote last year to Mel’s then-campaign finance director, Kirk Fordham. Kirk is an out gay man who, for one reason or another, decided to cast his political fortunes with some of the nation’s most well known homophobes. His resume reads like a Who’s Who in American Hate with such entries as Senator James Inhofe (R-OK) and Martinez. Before the right wing extremists took control of their party, men like Representative Mark Foley (R-FL) and Kirk Fordham claimed they were working from within the system to improve it. Of course, we know those days are over. One need not look any further than Foley’s recent vote to strip gay and lesbian job protections enacted by localities to realize just how kept in his place he is. My cat Abby has more balls than Mark Foley,

Some of the very same people who supported Mel Martinez’s run for the Senate were filled with glee when Mark Foley’s run for the same seat was derailed. In the backrooms (hmmmm) of the GOP there was no way it would be tolerated to let a gay man represent Florida in the US Senate. (There must be two Floridas: Jeb Bush’s version and then the state that is home to Key West, South Beach and the biggest cast closet of queens on the planet, Walt Disney World.

So, what we have is a right wing Congress out of control with inexperienced freshmen like Mel Martinez whipping his house servants like Mark Foley into submission on a regular basis all courtesy of political scum like Brian Darling and gay men like Kirk Fordham who would sell their partners down the river for personal gain. As Linda Ellerbee used to say at the end of her groundbreaking overnight newscasts, “And so it goes…”

Hastert’s spokesman says the accusations by Fordham are not true.

Update 5: (7:30 PM CST) Jeff Rooney has some serious questions on the developments today:

QUESTION – Did Fordham have acccess to Foley’s IM account information, screen name and password? Very likely. Could he have passed this information onto Aravosis and Rogers? Very possible. Could some of the IMs been manufactured then by Rogers or Aravosis, those being reported by ABC. Probable.

We know someone logged onto Foley’s IM account yesterday when he was in a treatment center for 20-30 seconds, according to Fox News. Could this have been Rogers or Aravosis

I believe now that Fordham is gone, resigned or forced out, that my question carries more weight… Why would Aravosis claim he received the information from Fordham if he had not. How would Forhan know Foley was IMing former pages that had already gone home, unless he knew Foleys IM screen name and password. I highly doubt Foley would IM these teenagers in front of Fordham. (Amen) Fordham now is mad he is gone and is lashing out to try and cover his tracks with Aravois(?)

Coincidently, he is now claiming he told REP leadership three years ago, about the same time Rogers came into possession of IMS from Foley. Yeah, now that is too much of a coincindence. Something stinks here big time.

You would think that ABC would have checked that out!!