A year ago this month, Gerhard Schroeder left office as leader of Germany kicking, screaming and lashing out at Bush and Blair. 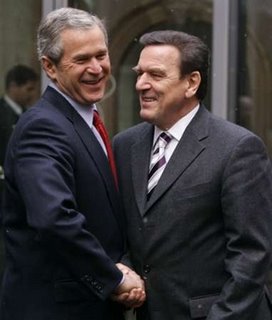 President George W. Bush and German Chancellor Gerhard Schroeder – Less than a year after leaving German politics a defeated man, Gerhard Schroeder is back with a new memoir brimming with the same swagger and controversy that characterised his seven years in office. In ‘Decisions – My Life in Politics’, the former German chancellor takes a swipe at U.S. President George W. Bush and blames Germany’s trade unions and members of his own party for forcing the early election which led to his defeat. (REUTERS/Alex Grimm)

Former failed German Chancellor Gerhard Schroeder has written a book linking the policies of President George W. Bush with those of radical Islamic states.
Davids Medienkritik has the latest on Gerhard:

But while Schröder and Bush’s initial meetings were friendly, in the end the German leader could not accept the fact that religion seemed to be the driving force in the US president’s political decisions.

“If a person adopts a political policy based on what he gleans from his prayers, in other words a personal talk with God, it can lead to difficulties in a democracy,” Schröder told the newspaper (Bild am Sonntag).

The Age of Enlightenment in the 18th century led to a separation of church and state powers “from political action based on individual beliefs,” he said. He wrote that some elements in the United States are hypocritical regarding secularism and government.

“We rightly criticize that in most Islamic states, the role of religion for society and the character of the rule of law are not clearly separated,” Schröder wrote. “But we fail to recognize that in the USA, the Christian fundamentalists and their interpretation of the Bible have similar tendencies.”

There is much more at Medienkritik including the Gerhards’s glowing comments on Vlad Putin.