Andy Rooney thinks the people of Iraq were better off under Saddam Hussein. 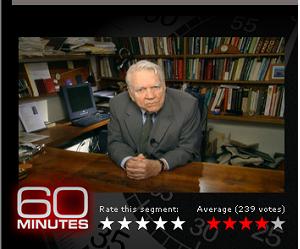 Andy Rooney on the War in Iraq Video HERE

I’d like to talk to you about something you probably don’t want to be talked to about.

Someone – and I guess it’s President Bush – has to tell us what in the world we’re doing in Iraq now. I don’t think any of us know. We did the right thing getting rid of Saddam Hussein, but what are we doing there now?

The Pentagon never tells us anything. Usually reporters and cameramen let us know quite a bit but it’s so dangerous for them in Baghdad now that even they can’t show us much of what’s going on.

So far almost 2,800 American soldiers have been killed in Iraq. I say “almost 2,800” because there is no exact number. It changes by six or eight every day. That’s how many of our young men get killed? And for what? Just tell us, Mr. President. For what? It hasn’t even been good for Iraq; it certainly hasn’t been good for us. The whole world thinks less of us for what we’re doing there…

If you’re a regular viewer of 60 Minutes, you sure don’t expect Andy Rooney to be positive or funny any more, but you do expect his sour commentary to have at least an inkling of honesty to it.

Besides his horrific comment on Iraq being better off when the people were being gased with poison by their murderous dictator, his fuzzy math resembles figures you’d get from a Lancet Study.

According to Andy we are losing 6-8 soldiers daily in the quagmire.
That would come out to (considering we’ve been in Iraq over 1,300 days) 7830 to 10,440 dead American soldiers.

It would probably help Andy if he would at least have some honesty to back up his Anti-Bush statements. You would think so anyway.

Related: The Strata Sphere sees hope for the terrorists.