THE PROOF THAT DEMOCRATIC OPERATIVES WERE AFTER MARK FOLEY SINCE 2004!!

Sister Toldjah leads you down the path to Macsmind.
**You must read the whole Macsmind update.**

Macsmind put together this link to the Foley memos:

They’re may be a possibilty that the one who runs Blog Active.com, and the one who runs Stop Sex Predators may be one in the same. That may be Mike Rogers, the infamous Gay Republican Outer.

Well the good news is that the Democratic Congressional Campaign Committee is finally getting it. I called their Director of Communications, Bill Burton, to let him know that the Foley thing (and another case) were coming down the pike. While Burton promised to have someone email or return my call and didn’t, I am glad he followed up on my call and was ready on Friday to come out of the gate running.

Rogers is miffed that the DCCC has been deleting his posts. No wonder as even they sense a major backfire if it get’s out that this was all a “Gay Republican Outing” that netted more than it bargained for. 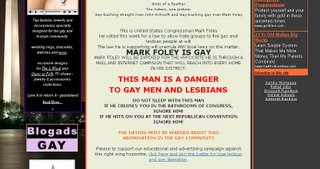 Here are the threats and plans to destroy Mark Foley printed at a Leftist-haters blog back in March of 2005:

This is United States Congressman Mark Foley
He voted this week for a law to allow hate groups to fire gay and lesbian people at will
The law he is supporting will overrule ANY local laws on the matter.
MARK FOLEY IS GAY
MARK FOLEY WILL BE EXPOSED FOR THE HYPOCRITE HE IS THROUGH A MAIL AND INTERNET CAMPAIGN THAT WILL REACH INTO EVERY HOME IN HIS DISTRICT.

THIS MAN IS A DANGER

TO GAY MEN AND LESBIANS

DO NOT SLEEP WITH THIS MAN
IF HE CRUISES YOU IN THE BATHROOMS OF CONGRESS,IGNORE HIM!
IF HE HITS ON YOU AT THE NEXT REPUBLICAN CONVENTIONIGNORE HIM!

Please to support our educational and advertising campaign against this right wing hypocrite, click here and join the battle for true lesbian and gay liberation.

And back in 2004 there were open threats in the Washington Blade by Rogers targeting Foley:

20 offices said targeted
Not likely, say Mike Rogers and John Aravosis, the two men loosely heading an ongoing outing campaign on the Hill. As the date nears for a Senate vote on the Federal Marriage Amendment, which would ban gay marriages in the Constitution, Rogers said the outings have picked up steam — from 13 documented offices to nearly 20 currently on a target list provided by Rogers to the Blade.

In addition to Tolman, Rogers and Aravosis, working in tandem but not together, claimed in the last week to have outed via the Web Democratic Sen. Barbara Mikulski of Maryland and Republican Congressman Mark Foley of Florida.

While Tolman confirmed he is gay, the Mikulski’s office refused to comment on speculation she is a lesbian, something Aravosis implied last week on his site.

A spokesperson for Congressman Mark Foley (R-Fla.) also declined to comment after Aravosis specifically asserted that Foley is gay on his Web site last week.

Both members of Congress have long been the subject of rumors about their sexual orientation.

Foley abused his position and may have been involved in criminal activity.

Democrats knew this for over a year.
With 6 weeks before the November elections, they broke the dam loose!

More from March 2005 at BlogActive… 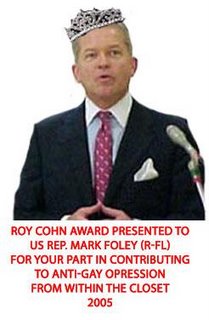 blogACTIVE.com has confirmed with three separate sources that, in fact, US Rep. Mark Foley is a gay man. Foley has voted to support discrimination against gay men and lesbians on more than one occasion.

A source has confirmed with blogACTIVE.com that Foley lives a practically an out life at his Florida residence, often seen entertaining gay men, some of whom the source described as “close to underage.”

…I’ve thought hard about what kind of TAKE ACTION would work, but there is really is none right now. Everyone already knows Foley’s a self hating closet case. When we get closer to the mid-term elections, I am sure more will surface.

And, there you have it!

Not only did I receive a nice number of tips, but I have also been put in contact with a number of new sources of information. Let’s just say, 2006 is going to be a busy year on the site.

…I’ve been able to dedicate all of your support to blogACTIVE to the research of hypocrites. In one case, I even had to buy two last minute tickets to fly to sources — meetings I could not mention at the time — (you’ll have to trust me, six months time will prove one of those trips was worth every penny).

(Let me clarify, there are 2 issues here: There is the sexual predator issue that is abominable, and then there is the skunk issue, those that waited with their reports while children were in jeopardy until 6 weeks outside of an election to release their “news”!)

Update: Why Were They Silent?