“The only way you can make the change that needs to be made for our country- a new direction where we’re there for the many and not the few- is to drain the swamp.” 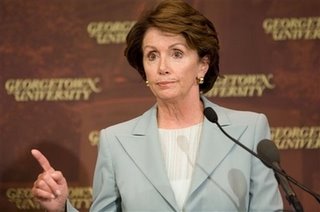 In her hopes to become the Speaker of the House, Nancy Pelosi spelled out a plan for America this past week including this:

Should Democrats win, Pelosi promised they would approve rules to “break the link between lobbyists and legislation” and enact legislation adopting all the recommendations of the bipartisan commission that investigated the Sept. 11, 2001 terrorist attacks…

It appears you voted against the recommendations of the 9-11 Commission on October 8, 2004.

Is this just another democratic game? Et tu, Madam Speaker?

Oh, and Pelosi is not the only democrat pulling that trick…
Harold Ford Jr. stoops even lower in Tennessee.

In Ohio…
Bizzyblog points out gubernatorial candidate Ted Strickland’s bizarre response to a House vote on a pedophilia study.

And, in Mississippi…
Blacks are suppressing the white vote.