Sadly, this is not the first time that Steele has had to deal with a racist attack from democrats. 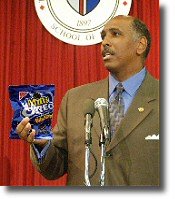 Here is another racist Photoshopped picture at a democratic website of Michael Steele with his oreos. (white in the middle, chocolate on the outside)

Cardin, a dry and detailed-oriented career legislator, was upstaged at his Upper Marlboro event Sunday by the irrepressible Rep. Steny Hoyer, who did a comedy routine about the event’s host, Cool Wave Water, and told the audience that Steele had had “a career of slavishly supporting the Republican Party.”

Black voters account for about one quarter of the state’s electorate; President Bush carried only about 10 percent of them in 2004, according to exit poll interviews.

If Steele can win 25 percent of black voters, he could pull off an upset.

Of course it was just last month that one of Cardin’s staffers joked about people throwing oreos at Michael Steele.

Do you suppose this will get as much play as “macaca” did in Virginia?

Michelle Malkin has more on the attacks on Steele today.