In the email today from Angela at Crew Creative:

My name is Angela from CREW and I thought you might be interested in a few highly controversial clips from the upcoming film CONVENTIONEERS. Shooting entirely in New York, director Mora Stephens and producer Joel Viertel utilizes the 2004 Republican National Convention by incorporating events of the RNC into the storyline of the film. The film blends actors with real events and real activists from both sides of the aisle, and features breaK through performances by actors Mathew Mabe and Woodwvn Koons as the two star-crossed lovers and Alex Friedman as the interpreter, all of whom must choose between their political ideas and their personal desires during the tumultuous days of the convention.

CONVENTIONEERS will be in limited release beginning October 20, 2006, just in time for the election season. Exclusively on iklipz, we have available the behind the scenes footage of Mora and Joel’s arrest as well as a look inside the Republican National Convention through CONVENTIONEERS.

A street scene from “Conventioneers” 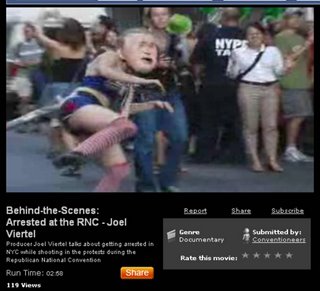 Clips to the film can be viewed Here, Here, and Here.