CNN may be in very serious trouble!

If the decision to oust Aljazeera set any precedent,
CNN may also find itself banned from broadcasting in Iraq! 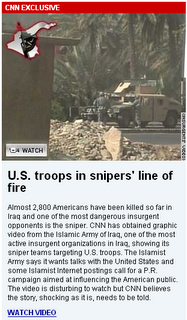 CNN dared itself to show Islamic snuff films of terrorists killing US soldiers this week.
The video clip was from an Islamofascist propaganda film!

Here is how CNN describes the horrific scene of the murder of one US soldier by a sniper:

The graphic video of 10 sniper attacks was obtained by CNN — through intermediaries — from the Islamic Army of Iraq, one of the most active insurgent organizations in Iraq.

In one scene, U.S. soldiers mingle among Iraqi civilians on a city street as a U.S. Humvee with a gunner in its turret stands guard nearby.

From a distance, possibly hundreds of yards away, a sniper watches for his opportunity to strike as a fellow insurgent operates a camera to capture the video for propaganda purposes.

In the video, street sounds mix with male Arabic voices as the sniper and his spotter talk off-camera.

“People are around them,” warns the spotter, who seems to be operating the video camera. “Want me to find another place?”

And then, the crack of gunfire is heard and the soldier in the turret slumps forward.

“Allahu Akbar (God is Great)!” is the exclamation as the sniper’s vehicle starts and they slip away.

** Do you suppose CNN contacted that family of that US soldier before they aired the clip of their son’s death?
** And… do you suppose CNN will make a correction for claiming that sniper fire is so dangerous to our soldiers and marines. That’s crap, the cowards! The most dangerous tool (via Iraq Coalition Casualties) of the insurgents arsenal is the cowardly IED’s they plant in the roads and soccer fields that are killing so many innocent Iraqis!

CNN explained that there was a need for them to air this terrorist propaganda:

The video is disturbing to watch but CNN believes the story, shocking as it is, needs to be told.

When confronted, CNN showed its smug a$$ like the New York Times did after publishing one of the national security secrets earlier this year.

The milbloggers at Blackfive were outraged with CNN’s poor choice:

Yeah, I’m sure CNN agonized over the decision to post the video of terrorists killing American troops.

Bottom-line: CNN knowingly plays into the hands of the enemy.

How do the troops feel? My In-Box is flooded with angry emails.

But, CNN may find itself in a very uncomfortable position…
In 2004 Iraq banned Aljazeera broadcasts after the popular Arab News Channel also aired terrorist propaganda film:

“Al-Arabiya’s main rival, al-Jazeera, has been banned since 2004 when the authorities accused it of provoking violence by showing footage filmed by militants.”

In September of this year, Iraq closed Al-Arabiya’s television offices in Iraq for a month. The government claimed that Al Arabiya was inciting sectarianism and promoting violence.

If precedent is anything, CNN ought to start packing!

Show Me Stater says CNN Should Face the Music
Blue Crab Boulevard has more on Muslim Savagery right here in America.
Dinocrat has more on the politico-religious enterprise of Islam.
Atlas has amazing news of extremist Islamic sermons being aired in the United States.
Hat Tip Larwyn

The New York Times finally admitted they made a mistake today, will CNN?