On August 19, 2003, at 4:45 p.m. local time, a truck bomb exploded outside the United Nations Headquarters in Baghdad. Several American military personnel were called to the scene to evacuate those who were badly hurt… 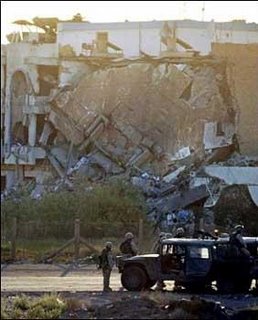 …But, Josh Lansdale was not one of them.

Josh Lansdale has done a lot talking this past year about his time in Iraq.
And… Not a word of it is true!

Besides the articles written about Josh describing his days in Iraq, in September, Josh made a commercial for democrat Claire McCaskill against the Missouri Veteran’s Administration and and Senator Jim Talent (Ad Here). Josh blamed Senator Talent for waits he endured at a VA Hospital. When asked, however, to justify those claims with appointment records, Josh became indignant and disappeared. Now, Josh is filming more angry veteran commercials, this time for votevets.org, a democratic anti-Iraq War organization headed by Wesley Clark. The ads are airing throughout the country in an effort to take down Republicans.

Here is a very important letter received from Staff Sergeant (Retired) Steve Howe 487th ENG DET (Firefighters) who served with Josh Lansdale in Iraq.
With permission I am republishing it here:

Josh was assigned to our unit prior to our deployment
to Iraq. Initially, every body thought he was OK, but
eventually, he turned out otherwise. He was assigned
to drive a water tanker for the 487th Firefighters
when we deployed. We eventually wound up with 3 fire
stations, and I was NCOIC of the station that covered
the main troop housing and logistic support area (LSA
Anaconda AKA Balad Airbase). Lansdale was assigned to
the airfield.

I read in the KC Star about Lansdale’s PTSD, and then
I read about what he was saying:

We had 1 helicopter crash the entire time we were
there. It was off base, all pilots got out OK, and
the Army prefered that it burn up so they enemy could
not get any publicity or items from it.

We had 1 car bomb at the north gate which myself and
the other members of the LSA station responded to.
Josh was not there. As far as fires, we had quite a
few. ALL fires consisted only of property damage, and
no soldiers were injured or killed in any structure
fire on our base.

Now, the UN Emabassy bombing. That occured in Baghdad
when the commander, myself, the rescue crew chief and
another were there for a meeting. No member of the
487th Engineers responded to that incident. The
closest we came was organizing a response team who had
experience in collapse rescue, or construction. We
were never called to assist, and Lansdale was NOT even
part of the crew that was organized.

There were mortar and rocket attacks, but with the
assets we had at the LSA fire station, we did not use
the water tanker from the Airfield station where
Lansdale was. I recall him driving the water tanker
to 1 fire, and he never made it because he went off
the tarmac and got the tanker stuck in the mud.
Actually, has Asst Fire Chief, I responded to the
majority of base and off-base responses, and Lansdale
was nowehere near. I remember him driving the tanker
to fill shower points, playing video games in his
tent, or chasing females from another unit. That’s
what I recall him doing.

As far as his injury, IF he got it over there, I don’t
recall. If medical records say a volleyball injury,
I’d believe that. Truthfully, I would have let this
all blow over if he had not started with the BS I read
in the KC Star. It minimizes what the other soldiers
did in the unit that actually WERE talking the talk
and walking the walk. I have a friend and former
487th member in the hospital right now from PTSD from
seeing a soldier blown apart after an accident.
Myself and 3 others were on the receiving end of an
RPG attack in Samarra, Iraq. A 10 year old child had
his arm and part of his chest blown off in that
attack.

On November 11th, 2005, I buried my son, SPC
Darren Howe of the 3rd Infantry from wounds he
received in an IED attack. If Lansdale has PTSD from
his experience in Iraq, I should be in a freakin loony
bin.