HotAir has the video of Bush in Georgia.

“Even in the midst of a heated campaign season, there are still some things we should all be able to agree on, and one of the most important is that every one of our troops deserves our gratitude and respect.”

Bush blasted John Kerry’s hateful and ignorant remarks about the military today at a campaign stop in Georgia! 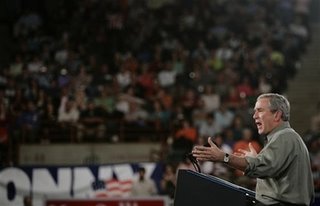 President Bush gestures during a rally for the Republican party at the Georgia National Fairgrounds in Perry, Ga., Tuesday, Oct. 31, 2006. (AP Photo/Evan Vucci)

John Kerry lashed out at the Republicans for his own comments today… typical.
His comments about stupicd soldiers were distorted don’t you know. “They’re liars.”
Republicans are dishonoring the troops.
Video HERE

The American Legion demanded an apology from Lurch:

The National Commander of The American Legion called on Sen. John Kerry to apologize for suggesting that American troops in Iraq are uneducated.

“As a constituent of Senator Kerry’s I am disappointed. As leader of The American Legion, I am outraged,” said National Commander Paul A. Morin. “A generation ago, Sen. Kerry slandered his comrades in Vietnam by saying that they were rapists and murderers. It wasn’t true then and his warped view of today’s heroes isn’t true now.”

While addressing a group of college students at a campaign rally in Pasadena, CA., Monday, Kerry suggested that they receive an education or “if you don’t, you’ll get stuck in Iraq.”

“While The American Legion shares the senator’s appreciation for education, the troops in Iraq represent the most sophisticated, technologically superior military that the world has ever seen,” Morin said. “I think there is a thing or two that they could teach most college professors and campus elitists about the way the world works.

“And while we are on the topic of education, why doesn’t the senator and his comrades in Congress improve the GI Bill so all of today’s military members – reserves and guard included – can achieve the educational aspirations that the senator so highly values?” Morin said. “The senator’s false and outrageous attack was over-the-top and he should apologize now.”

AMVETS had this to say about JFK’s outrageous remarks:

“For the Senator to suggest that today’s United States military is made up of uneducated men and women who didn’t ‘study hard’ or ‘make an effort to be smart’ is ridiculous and appalling,” AMVETS National Commander Thomas C. McGriff said Tuesday. “The men and women in uniform today make up the most advanced, highly-educated force ever seen. To suggest otherwise is a slap in the face to every soldier, sailor, airman, Marine and Coast Guardsman who has spent countless hours working to better him or herself. This is also an insult to every person and organization who has worked tirelessly to provide our troops and their families with education benefits.

“Senator Kerry should retract his remarks and apologize immediately.”

Here is one soldier’s explanation on why he serves.