The situation in the Palestinian Territories is very tense after 12 were killed in the worst factional violence in months. 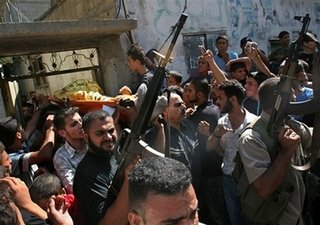 Mourners carry the body of Palestinian security force officer Ramadan Ramadan, who was a member of Palestinian Authority President Mahmoud Abbas’ Force 17, wrapped in a Fatah flag during his funeral in the Nusseirat Refugee Camp, central Gaza Strip, Monday, Oct. 2, 2006. Ramadan was killed during clashes with Hamas gunmen in central Gaza Sunday, Palestinian sources said. Hamas militiamen withdrew from the streets of Gaza Strip on Monday and returned to their normal posts after the worst day of internal violence since Hamas took control of the Palestinian government in March. (AP Photo/Adel Hana)

It sounds like the breakout of violence in the Palestinian Terriritories where 12 have died since Sunday is far from over. Fatah gunmen threatened to kill Hamas leadership today:

The current wave of violence which began on Sunday has killed 12 people and injured more than 100 most casualties occuring in clashes between Palestinian president Mahmoud Abbas’s Fatah faction and Hamas in the Gaza Strip and the occupied West Bank.

“We in al-Aqsa announce, with all might and frankness, the ruling of the people in the homeland and in the diaspora, to execute the head of the sedition, Khaled Meshaal, Saeed Seyam and Youssef al-Zahar, and we will execute this ruling so those filthy people can be made an example,” a statement said.

Also on Tuesday, gunmen allied with Fatah forced the closure of several schools throughout central Gaza, ordering children and teachers to leave.

Fatah gunmen also blocked a major intersection in central Gaza on Tuesday, shouting “Down, down with Hamas,” burning tires and garbage dumpsters and shooting in the air.