One passenger had to smash a window in the bus to escape,
BBC Video HERE 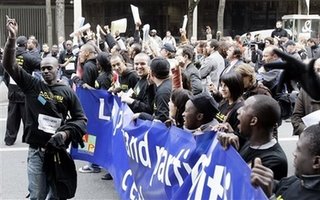 A local citizen pressure group march along a street in Paris to present a collection of 20,000 complaints to lawmakers, Wednesday Oct. 25, 2006. Several hundred people, largely of North African and African descent, staged the protest ahead of Friday’s first anniversary of fiery suburban riots that shook France. (AP Photo/Francois Mori)

Youths in the Paris suburbs have attacked two buses in separate incidents on the eve of the anniversary of rioting among immigrant communities.
In Nanterre, northwestern Paris, about 10 passengers fled a bus as masked youths set it ablaze, police said.

A similar attack happened in Bagnolet, eastern Paris, where a youth held a gun to the bus driver’s head while others set it on fire, officials said.

Police report a spate of youth violence ahead of the anniversary.

A security services report leaked to a French newspaper this week said that the conditions that led to last year’s riots were still in place. 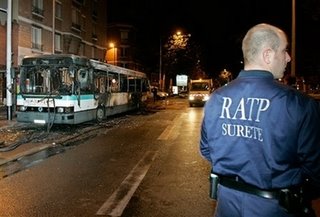 A French security public transport operator, from RATP, watches over the remains of a city bus Wednesday, Oct. 25, 2006, at the bus station of Nanterre, west of Paris. The bus was set on fire on Wednesday night in Nanterre by a gang of youths, after they forced passengers out. (AP)

The “North African youths marched to the Ntional Asesembly yesterday to demand action:

Several hundred youths, of largely African and North African descent, marched to the National Assembly in Paris on Wednesday to present a list of complaints to the government.

They called for more action to tackle discrimination and more jobs and training for the young.

“Lots of people don’t believe what we’re doing. They don’t understand the potential,” Abdel Zahiri, one of the marchers, told the Associated Press news agency.

“The risk of violence exists, but hope exists, too,” he said.

No Pasaran! says it was four buses that were torched, one of them was hijacked.