World renowned sumerologist, Dr. Muazzez Ilmiye Cig, is facing trial in Turkey at the age of 92.

The prosecuting attorney is not pleased that Dr. Cig wrote that “bitches” wore headscarves during the Sumer Period. 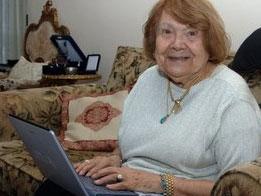 Vatan yesterday reported that Muazzez Ilmiye Cig, the world’s most renowned Sumerologist and 92 years old, was facing charges for having stated that Sumerian women were the first ones to wear a headscarf in history.

Cig said: “Covering one’s head existed before the Christian era, but that was not for religious purposes. It served the function of showing a woman’s social standing. This is a historical fact. Now if I get convicted for this reason, I would never apply to the European Court of Human Rights. I would never sink as low as to accuse my own country.”

The public prosecutor claims she is inciting hate with her latest book that claims that “bitches” wore headscarves during the Sumer Period.

The historical study did not go over well with the local radicals.
InfoTurk reported:

Historian and Publisher on Trial… Public Prosecutor in Beyoglu launched a court case against sumerologist Muazzez Ilmiye Cig and director of Cag ve Analiz Publishing Ismet Ogutucu in connection with the book of Cig with the title “My Reactions as a Citizen”.

The book is a compilation of Cig’s letters to Recep Tayyip Erdogan when he had been Istanbul mayor and articles published in 1997 in the journal “Bilim ve Utopya”. Cig alleges in the book that the headscarf was used in the past to distinguish women from each other. She gives the example that bitches during the Sumer period were using headscarves and Prophet Mohammed also wanted females in his family to use headscarves to be distinguished. (Cumhuriyet)