Anti-government protests in Zimbabwe were called off today after police arrested and beat the protest organizers. 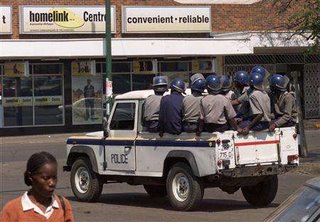 Police swooped in to arrest the protest leaders before the protests could get of the ground in Zimbabwe’s major cities:

Officers equipped with batons and teargas canisters swooped on Harare’s central business district, grabbing 15 protesters, including leaders of the Zimbabwe Congress of Trade Unions (ZCTU) as they tried to gather, witnesses said.

Mugabe’s government has vowed to tolerate no unapproved demonstrations amid tensions over an unresolved political standoff and an economic disaster that has brought inflation to near 1,000 percent and left consumers struggling with frequent shortages of basic commodities. 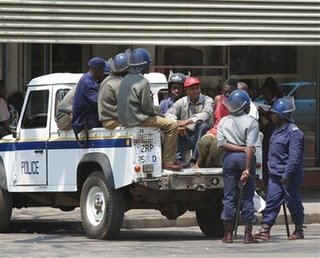 Riot police keep an eye on detained protesters on the back of their Landroverafter they were arrested in Harare, Wednesday, Sept, 13, 2006. Police sealed off several main streets and the central square in the Zimbabwe capital Wednesday to head off a protest march called by the main labor federation .(AP Photo/Tsvangirayi Mukwazhi)

As Zimbabwean President Robert Mugabe arrived in Cuba for the Non-Aligned Movement Summit, his riot police beat down the protesters in the capital of Harare:

Police arrested trade union leaders and blocked streets and the main square of the capital to thwart an anti-government march, and the main labor federation apparently called off a planned nationwide strike at the last minute.

Police bundled leaders of the Zimbabwe Congress of Trade Unions into vans as they tried to start a procession.

Congress spokesman Mlamleli Sibanda said 15 union leaders and activists were arrested in Harare, 20 in the second southern city of Bulawayo and four in northwest town of Chinhoyi. They included the Congress’ president, Lovemore Matombo, and secretary-general, Wellington Chibebe.

Chibebe, speaking by telephone from jail, told the British Broadcasting Corp. that police beat him and others with batons and rifle butts. 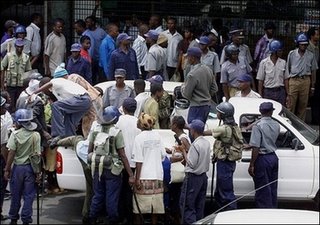 Zimbabwe police surround suspected Zimbabwe Congress of Trade Unions (ZCTU) demonstrators in Harare. Opponents of veteran Zimbabwean President Robert Mugabe have been forced to abandon plans for mass anti-government protests Wednesday after the organisers were rounded up in a police crackdown.(AFP/Desmond Kwande)

And, New Zimbabwe is reporting… President Mugabe’s spokesman, George Charamba, who is also the Permanent Secretary in the Ministry of Information, nearly killed his wife after she accused him of infecting her with the deadly HIV virus.