With only 20% of Iraqis opposing him, it’s about time to bring Iraqi Prime Minister al-Maliki down a notch! …At least, the New York Times thinks so. 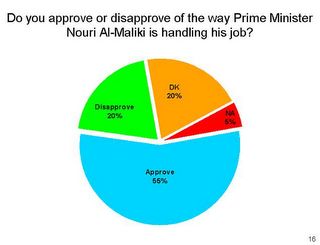 Only 20% of Iraqis disapprove of the way Prime Minister al-Maliki is handling his job.
(NRI Survey)

The New York Times does what it does best!

Today the Times reported on the “Doubts Against Prime Minister al-Maliki” by unnamed Senior Iraqi and US officials:

Senior Iraqi and American officials are beginning to question whether Prime Minister Nuri Kamal al-Maliki has the political muscle and decisiveness to hold Iraq together as it hovers on the edge of a full civil war.

Four months into his tenure, Mr. Maliki has failed to take aggressive steps to end the country’s sectarian strife because they would alienate fundamentalist Shiite leaders inside his fractious government who have large followings and private armies, senior Iraqi politicians and Western officials say. He is also constrained by the need to woo militant Sunni Arabs connected to the insurgency.

Patience among Iraqis is wearing thin. Many complain that they have seen no improvement in security, the economy or basic services like electricity. Some Sunni Arab neighborhoods seem particularly deprived, fueling distrust of the Shiite-led government…

The main Shiite bloc itself is deeply divided, depriving the prime minister of crucial support. So he relies on Moktada al-Sadr, the Shiite cleric who commands the powerful militia called the Mahdi Army, for political backing. The militia has been blamed by many Sunni Arabs for sectarian killings…

Well, here is one hooligan from Sadr’s militia who was confronted today. He joined dozens of other al-Sadr hooligans who were killed in earlier confrontations.

Who the h*ll is writing for the Times? An American journalist, or Al Qaeda?

The Times gives a better review on Ahma-nutjob, the enemy, than the leader of the democratically elected Iraq!… Pathetic!