The communists and communist sympathizers at International ANSWER held a rally in Washington DC on Saturday to free the Cuban Five who were charged with espionage last year in US Federal Court. 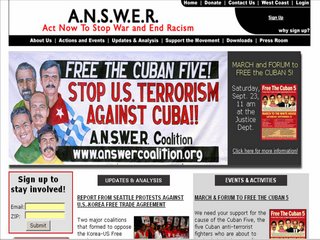 Castro sends a note on his health to the useful idiots supporting Free the Cuban Five…
Fidel says he is doing much better, although he lost some weight.

The five Cuban men were arrested and later found guilty of espionage and conspiracy to commit murder:

The five were arrested in Miami, Florida in September 1998, they were indicted by the U.S. government on 26 different counts ranging from using false identification to espionage and conspiracy to commit murder. In June 2001, they were convicted of all 26 counts by a U.S. federal court in Miami and in December sentenced to varying terms in maximum-security prison: two consecutive life terms for Hernández, life for Guerrero and Labañino, 19 years for Fernando Gonzáles, and 15 years for René Gonzáles.

The arrest and conviction incited an uproar from the Cuban government and sympathetic groups, and an international campaign to free the five took form.

The National Committee to Free the Cuban Five held a press conference on Friday as well. 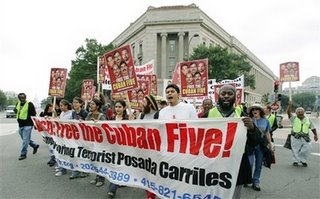 Protestors march in front of the Department of Justice to protest the conviction of five Cuban government agents who were sentenced to long prison terms on espionage charges in south Florida, Saturday, Sept. 23, 2006, in Washington. Their defenders maintain they were gathering intelligence on possible plans for attacks against Cuba by Miami-based militants. (AP Photo/Manuel Balce Ceneta) 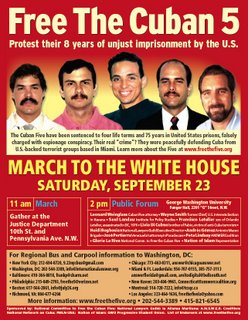 Jim Hoft
Jim Hoft is the founder and editor of The Gateway Pundit, one of the top conservative news outlets in America. Jim was awarded the Reed Irvine Accuracy in Media Award in 2013 and is the proud recipient of the Breitbart Award for Excellence in Online Journalism from the Americans for Prosperity Foundation in May 2016.
Apple Labels Police as Terrorists in Latest Update to Siri -- You Can Try It Yourself!
BREAKING: Burisma Investigation to be Released within 24 Hours -- FINDS BIDEN FAMILY GUILTY LIKELY CRIMINAL ACTIONS (VIDEO)
Let's Make Her Famous! Violent, Foul-Mouthed Leftist Caught on Video Ripping Down Trump Sign in Castle Rock, Colorado
Karma's a Bitch -- Angry Woman Driver Screaming at Trump Supporters and Flipping the Bird Rear-Ends Car in Front of Police (VIDEO)
Obamagate the Movie Is Being Censored by Twitter -- China-Like Censorship in US During an Election -- Where Is the GOP?
See more...