Although it was tempting for some, unlike the democrats, Republicans passed on the blackface and drag pictures of their most moderate candidate. 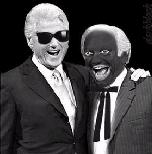 Democrats won’t be able to say that “Republicans do it, too!” this time. Republicans draw the line on cannibalism… this year, anyway.

Sen. Lincoln D. Chafee, a moderate who has frequently clashed with the Bush administration, beat back a strong conservative challenger Tuesday night in the GOP primary in Rhode Island.

The victory came amid heavy turnout, after the same Republican establishment that Chafee has so often defied rallied to his side with money and logistical support for a vigorous get-out-the-vote effort. While there is little personal affection for Chafee at the White House, operatives there and in the Republican Party leadership calculated that he is the GOP’s best chance of holding the seat in a Democratic-leaning state in November.

Stephen Laffey, the blustery, populist mayor of Cranston, had sought to become the second challenger to topple a senator in a primary this year, after Sen. Joseph I. Lieberman’s loss to Ned Lamont in Connecticut’s Democratic primary last month. In the end, however, a race that for weeks had been widely viewed as neck and neck fell decisively in line for Chafee, who was commanding 54 percent of the vote with 99 percent of returns counted.

Hats off to the good Stephen Laffey for his efforts!
Captain Ed has more thoughts on the primary action.
AllahPundit followed the race last night.

In other races, Maryland Republican Michael Steele will be up against Democrat Benjamin L. Cardin who outpaced opponent Kweisi Mfume, the NAACP figure.