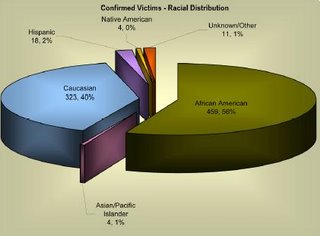 At least, there are no public records of “poor, blacks dying on rooftops” before military rescuers could get to them. Just like there are no records of blacks in New Orleans eating corpses to survive!

According to the State of Louisiana there were no statistics taken on the number of poor, black deaths on rooftops in New Orleans, Louisiana, after Hurricane Katrina.

Again- No “rooftop death statistics” were taken following the storm.

So, despite the the insistance by Democratic Senate Candidate Claire McCaskill claims that “many people felt this about the tragedy” this line is not just outrageous…

And, from the final Louisiana DHH Final Report you can see that no group can claim a monopoly on pain and suffering- except the elderly.
The deceased from hurricane Katrina:

* 1,464 victims perished as result of Hurricane Katrina (according to DHH website)
* 875 victims examined through the DMORT morgue facilities were determined by the State
Medical Commander to be storm-related deaths
* 20 bodies were recovered in New Orleans by the Orleans Parish Coroner following the
closure of the Carville facility
* 223 deaths were reported as storm-related by Parish coroners in Louisiana
* 346 deaths were reported as storm-related by coroners in other states
* 910 bodies were recovered and examined in the wake of the storms at the DMORT locations
(the temporary morgue in St. Gabriel and the Victim Identification Center in Carville)
* 875 of the victims were examined have been identified, which is a rate of nearly 98%
* 35 bodies examined at DMORT facilities were found to be non-storm related deaths
* Hurricane Rita Victims: One fatality was directly attributed in Louisiana to Hurricane Rita

The elderly had the worst time with the hurricane last year. 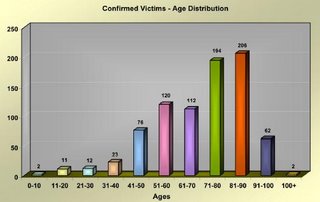 Claire McCaskill needs to apolgize, not just because her remarks were outrageous…
They were not true!

Claire’s presidential name-calling may not go over so well with those in Central Missouri, or “Ashcroftland” as Claire likes to call it.

The federal Office of Special Counsel is probing charges that Jackson County law enforcement employees were improperly directed by the sheriff, a McCaskill political ally, to appear in McCaskill campaign ads in uniform, on public time during her failed 2004 campaign for governor.