The Truth on Iraq:

The real story in Iraq is the undeniable reality that Iraqi security forces are approaching maturity, and there is absolutely nothing that the insurgents can do about it. As their forces reach maturity, with their acceptance by the general population a near certainty, and as the force numbers on the ground reach the level needed to maintain control throughout the country, the game is drawing to a close. Checkmate for the insurgency.

It is a matter of time before this happens. It may happen in six months or as long as two years, but it will happen.

In 2003, insurgent attacks looked like a shot-gun pattern across Iraq. Over time, they have become more and more regionalized, until last month, over half of the attacks occurred inside of Baghdad proper.

For all of Will Robert’s comments, he fails to identify that underlying pattern: It’s relatively easy to kill civilians, so the numbers themselves don’t mean that much. It is the absence of attacks in over 75% of Iraq that is more telling than the shear volume of civilian murders and other atrocities by the insurgents. They have lost the ability to operate in most of the country, and the squeeze is still on.

One thing that pops out from Haider’s comments is that there was wisdom in the disbandment of the old security forces. Had that not happened, it is very possible that the security forces would have remained untrustworthy by the people. In that case, the insurgency could have been looked upon as allies by the people. As things stand now, they are exposed as the murderous thugs they are…

“Iraqi Casualties Increase by 1,000 a Month”

What do you think of when you read that? That casualties (deaths) are increasing by 1,000 “each” month in Iraq… Of course, this is not so!

It’s not until you read the article that you see that they had to really work the numbers to come up with such a twisted headline.
From the article by Julian E. Barnes, a Times Staff Writer:

In a dismal assessment, the Pentagon reported to Congress today that the number of attacks and civilian deaths in Iraq have risen sharply in recent months — with casualties increasing by 1,000 a month — as sectarian violence has engulfed larger areas of the country.

The quarterly report, based on new government figures, shows that the number of attacks in Iraq over the last four months increased 15% and the number of Iraqi casualties grew by 51%. In the last three months, the report says, the number of deaths and injuries increased by 1,000 people a month over the previous quarter — to more than 3,000 each month.

The LA Times already has made one correction on the article, but didn’t change the title:

How about another correction? How about the truth? 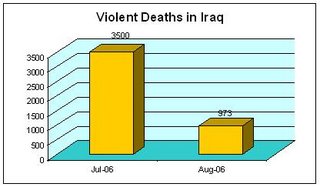 The truth is that Iraq saw major progress in the month of August as violent deaths in the country were close to one-third of what they were in July!

Why not print that?

This makes it even more clear that facts don’t matter to the LA Times…
It’s all about agenda!