Volokh Conspiracy is carrying this story today of the Montreal college campus killer: 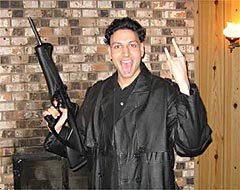 Montreal School Gunman Identified.–
Some news organizations have identified the gunman who walked into a Montreal school, opened fire, and then turned a school cafeteria into a “shooting gallery.” According to reports on CNEWS, he is Canadian-born Kimveer Gill, age 25:

“Kimveer Gill, 25, of Laval poses for a photo posted on the goth website VampireFreaks.com in a long black coat toting a rifle —- a chilling look at the man Sun sources have identified as the gunman who opened fire on students at Montreal’s Dawson College yesterday, killing one woman and injuring 19.”

“He looked really mad,” said Mathieu Dominique, 17, who was having a cigarette by the door when the shooter burst in less than three metres away from him.

“He was really into (the) shooting. . . He looked like he really wanted to kill people. . . . It was like, bullet after bullet. It was like a burst – like at least six shots in two seconds.”