The Pakistani authorities are shocked that Houston-based Pakistani-American Mariyah Moten participated in the recent Miss Bikini Contest in China on behalf of Pakistan.

If it’s any consolation, she did win the “Best in Media” category. 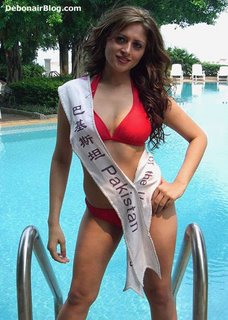 Mariyah Moten won the “Best in Media” category for being the most photographed and interviewed at the contest:

Mariyah Moten, a 22-year-old US-based Pakistani, is being billed as “Pakistan’s first Miss Bikini” after she topped the ‘Best in Media’ category at the Miss Bikini Universe pageant in China last week.

Having won the title at Beihai resort in southern China, wowing crowds there and alarming conservatives in Pakistan, Moten is currently in Mumbai for a “special interview” assignment with a major Indian newspaper chain.

The News International newspaper reported with the comment: “A few Pakistani women in the past have ventured to compete in beauty pageants but none has gone this far in terms of unsheltered territory.”

The Houston girl has “created a frenzy by participating in an international bikini contest and even landed a prize – even if not exactly for skin”, the newspaper said.

This is how Mariyah countered her critics:

“It’s the first time that Pakistan is participating in the bikini pageant, as we’re an Islamic country.”

She added, “Now, there’s less reproach in Pakistan on women’s participation in such beauty contests.”

The pakistanis may be used to seeing a little less skin at the beach. 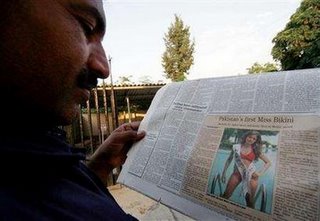