Despite the rhetoric and arrests, it’s hard to imagine democrats lasting more than two weeks in Sudan considering their parties track record and developing events on the ground.

Is it by chance that the backers of Hezbollah in Sudan are the ones committing genocide on southern Sudanese Christians and animists?

Hezbollah finds a fan base in Sudan. 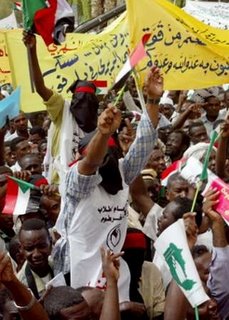 The radical Islamists in Sudan are no longer shy about their sympathies and leanings. This is a good strategy, really. It would be hard to keep Western troops in the region if they were being attacked by radical Islamists… Especially, if democrats take the House and Senate this fall. 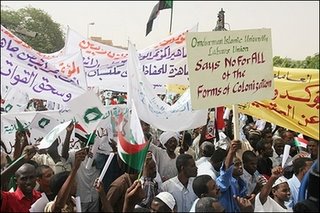 Demonstrators protest against the “western colonialists”, in reference to the US and Britian, who are backing a UN resolution to call for deployment of a UN force in Darfur, outside the UN headquarters in Khartoum, 30 August 2006. The United States said it had received reports of renewed fighting in Sudan’s Darfur region, one day after the UN Security Council called on Khartoum to allow a major deployment of peacekeepers to the area.(AFP)

Glenn Reynolds has a lengthly update on Darfur today including this from the Washington Post:

“In the face of ongoing genocide in Darfur, the international community’s failure to accept the ‘responsibility to protect’ (that’s United Nations language, officially adopted) innocent civilian lives has taken its last, abject form. The National Islamic Front (NIF) regime in Khartoum, made up of the very men who have for more than three years orchestrated the systematic destruction of Darfur’s African tribal populations, has been told directly and unambiguously that there will be no U.N. peacemaking force without its consent.”

Atlas Shrugs has the news of what John Bolton is doing to help those suffering in the Darfur region of Sudan.