The following is a Haider Ajina translation of a headline and article from the Iraq’s Aswat Aliraq September 28th.

The Shia of Karbala are offering a hand of reconciliation to its Sunni minority. 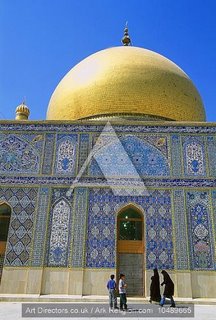 On Thursday a Shiite religious leader in Karbala province called upon the Sunnis who left Karbala to please return to their homes. These Sunnis left after the attack on Askariah Shrine in Samara last February. Please return to your homes to help of our national unity and national reconciliation programs started by Iraqi PM Alamliki to succeed.

Mr. Ahmad Alhussieny, a member of the Karbala provincial assembly (thus an elected official) and committee chair talked to Aswat Aliraq (an independent Iraqi news agency). Alhussieny said, “The return of displaced Sunnis to Karbala province (a heavily Shiite province) and the return their mosque’s use, which was vacated after the explosion at the Askariah shrine in Samara, is essential to the success of national reconciliation. This is very important and a way for the people of Karbala to show that we are committed to peace and reconciliation and will not be drawn, by the enemies of Iraq, into sectarian or religious strife. Alhussieny then called on the other provinces to follow Karbalas’ lead, by opening their hearts and their doors to their dear Sunni brethren who have been with us through out history.

He added, “In Karbala we have four Sunni tribes who carry prestige and influence, they are well known tribes like the Alsarifat & Alzakariet. We have over four thousand Sunnis brethren living in Karbala, none of who have suffered any harm since the fall of Saddam. The proclamation (or petition) calling for the return of any Sunni who has left Karbala for any reason was signed by the people of Karbala. The proclamation also demanded the return of the Sunni Alabasiah Mosque, to allow the Sunnis to practice their rituals and prayers. The Sunni residents of Karbala left their homes after sectarian strife was ignited by the Samara incidence; they locked up their Abasiah Mosque.

A Tunisian Muslim terrorist who was responsible for bombing the Shia Holy Golden Dome mosque in Sammara was captured in June.

We continue to hear about what are reported as sectarian attacks. Most these attacks are by Saddamists and Al Qaida in Iraq and their ilk. These groups are working together to continue to destabilize the government and try to start the fire of civil war and sectarian violence. Try as hard as they may Iraq it is not going to draw Iraqis to that. Most of religious and political leaders both Sunni and Shiite are continually calling for national reconciliation and national unity.

There are few fiery leaders who are not of the main stream and for their political benefit and to try to gain more power are preaching strife and non-cooperation. Iraqis know who they are and continue calling on them to stop this behavior. Most of these leaders are supported by Iran, Syria & Saudi Arabia, directly or indirectly.

Recently the Iraqi president Jalal Talebani (in an interview, on September 26, during his visits to the USA) warned Iraq’s neighboring countries that Iraq can cause difficulties for them if they do not stop meddling in Iraq’s internal affairs. He added that Syria, Iran and Turkey (Turkey was accused of shelling some Kurdish villages and sending some troops in and out of the border with Iraq) are interfering with Iraq’s affairs and warned them that Iraqi patience is on the verge of running out.

We demand that you (Iran, Syria and Turkey) stop interfering in Iraq’s internal affairs, and respect its sovereignty and independence, or we will be forced to make certain statements.

Very interesting words indeed. It appears that those who are truly afraid of a strong, independent, democratic, secular, law respecting Iraq are pushing harder and harder to stop that from happening. Is that because Iraq is gradually moving in the right direction?

And, in other Iraqi news…
The Sunni tribal leaders pledged their support to the Shiite Prime Minister Al-Amaliki this week in driving Al Qaeda from Iraq!