The protest was organized by Shia Muslim dignitaries against the minority Sunni government leadership. 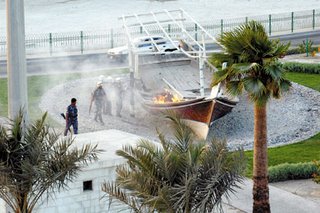 The Gulf Daily News reported, “It was a very peaceful demonstration. Everything went smoothly and as planned.” 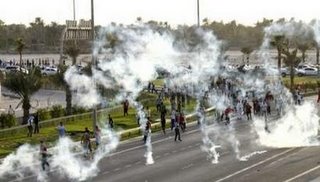 Riot police officers fire tear gas to push back demonstrators during a protest in Manama September 29, 2006. Protestors demonstrated against random nationalisation by the government of Bahrain on Friday. (REUTERS/Hamad Mohammed)

A rally held by political societies near Bahrain Mall on the issue of naturalisation turned violent yesterday. Demonstrators had arrived in buses and cars and began to assemble near the mall. By noon a number of people had gathered. Many of them carried banner and placards calling for a stop to naturalisation.

The police had set up barricades to prevent them from approaching the road near Dana mall. Police Jeeps were stationed on the flyover to control the situation. But the rally turned violent when some of the protesters started to throw stones at the police. The latter had to fire tear gas to disperse the crowd and one man collapsed due to suffocation. Protesters also damaged a police motorcycle and burned a wooden boat placed as a showpiece under the flyover in Seef. The police immediately extinguished the fire though by that time the fire brigade too had arrived on the scene.The head of the rally’s organising committee, Saeed Al Majid, said the Ministry of Interior had informed him that they would be changing the rally route as it would affect the traffic movement. 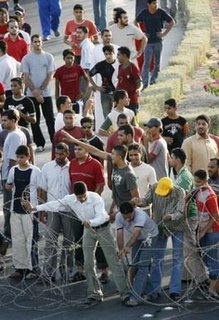 Protesters cut through barbed wire placed by riot police officers to prevent them from entering a higway, during a protest in Manama September 29, 2006. They were protesting against random nationalisation by the government of Bahrain. (REUTERS/Hamad Mohammed)

The Shia majority is concerned that the government is selectively granting naturalization rights to Sunni foreigners over other minority groups in order to influence the November elections.