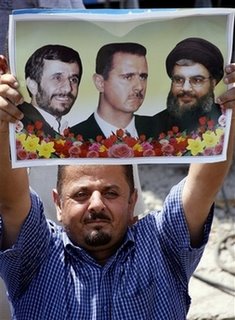 The BBC does not let on that the protests in Beirut were organized by Hezbollah.

** Notice, there’s no women in any of these photos from the protest. 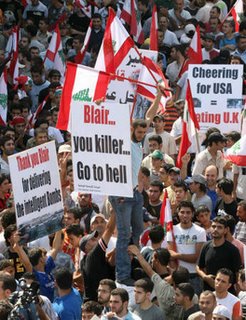 Tony didn’t have much luck in Gaza either:

Hamas, the militant group heading the Palestinian Authority, rejected his proposals that it should join a unity government which recognised Israel in order for an international boycott to be lifted.

A spokesman said the group was willing to form a coalition, but it would not accept conditions imposed from outside. 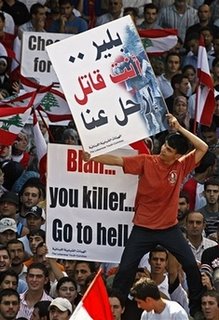 A protester holds a banner with Arabic writing reading ‘ Blair.. You are a killer. Go away’ during a demonstration against the visit of British Prime Minister Tony Blair to Lebanon, in Beirut, Monday, Sept. 11, 2006. Thousands of protesters shouted angry chants and accused British Prime Minister Tony Blair of complicity in last month’s Israeli bombardment of Lebanon as he arrived Monday in a country still reeling from 34 days of fighting. (AP Photo/Alvaro Barrientos) 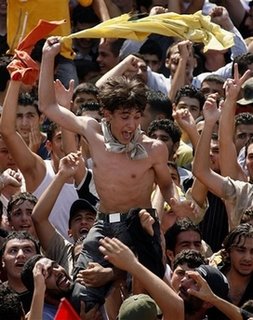 A protester, waving a Hezbollah yellow flag, is held by others shouting slogans during a demonstration against the visit of British Prime Minister Tony Blair to Lebanon, in Beirut. (AP) 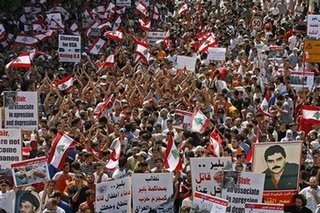 The poster at the bottom right of the picture is of Samir Kuntar, the brutal Hezbollah child killer held in Israeli prison. (AP)