Certainly the the United Nations and the International Court of Justice in The Hague will issue an Advisory Opinion on the legal consequences of Saudi Arabia’s planned construction of a fence on the border with Iraq. 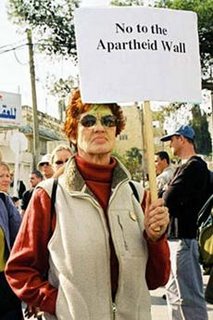 After Saudi Arabia condemned Israel at the UN General Assembly and voted to refer the Israeli fence to the International Court of Justice for an advisory opinion in 2004, they announced today that they are going to build a barrier on their border with Iraq. (to go with their Yemeni fence.)
Aljazeera is reporting:

Saudi Arabia has said it is pushing ahead with plans to build a 900km fence along its border with Iraq in an attempt to improve security.

Nawaf Obaid, a security adviser, said on Wednesday the $12 billion border will take between five and six years to complete and will have electronic sensors to protect the oil-rich kingdom from external threats.

US and Iraqi officials have complained about Saudis crossing into Iraq – mostly through Syria – to join the fight against US-led forces.

In addition, the Saudis want to prevent drug-smugglers, weapons-dealers and illegal migrants from using Iraq as an avenue into the country, said Obaid.

Brigadier-General Abdul-Karim Khalaf, the spokesman for Iraq’s interior ministry, said officials had heard of the plans to improve border security and added “we thanked them for it”.

Why not a virtual fence?… Was that option ever up for consideration?

Maybe, Saudi Arabia finally got fed up with those Arab terrorists returning to the Kingdom from Iraq!

The Astute Bloggers noticed the silence from the human rights organizations.