Via Stefania…
From a February 13, 1999 CNN article on Osama bin Laden: 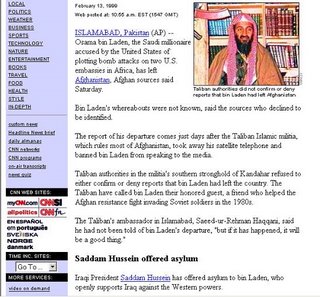 Here is more “Picture Proof” of the Saddam-Al Qaeda connections.

The White House set the record stright on Saddam’s links to Al Qaeda after the Senate committee released its flawed findings.

The Investors Business Daily has more.

And, about those WMD… Tim Blair reports what the experts were saying.

And, more… Porkopolis, the flying pig blog, has more connections overlooked by the media and voted on by both Democrats and Republicans.