CBS has video of the interview. 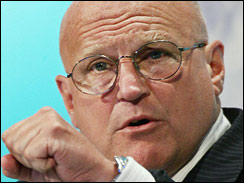 Richard Armitage… finally, after three years of watching Bush, Rove, Cheney, and Scooter, get dragged through the muck, confessed last night on CBS News that he was indeed the leaker of Valerie Plame in a casual conversation with Robert Novak. He also said that he never offered up her name:

When asked if he feels he owes the Wilsons an apology, he says, “I think I’ve just done it.”

In July 2003, Armitage told columnist Robert Novak that Ambassador Wilson’s wife worked for the CIA, and Novak mentioned it in a column. It’s a crime to knowingly reveal the identity of an undercover CIA officer. But Armitage didn’t yet realize what he had done.

So, what exactly did he tell Novak?

“At the end of a wide-ranging interview he asked me, ‘Why did the CIA send Ambassador (Wilson) to Africa?’ I said I didn’t know, but that she worked out at the agency,” Armitage says.

Armitage says he told Novak because it was “just an offhand question.” “I didn’t put any big import on it and I just answered and it was the last question we had,” he says.

“I had never seen a covered agent’s name in any memo in, I think, 28 years of government,” he says.

He adds that he thinks he referred to Wilson’s wife as such, or possibly as “Mrs. Wilson.” He never referred to her as Valerie Plame, he adds.

But, as Robert Novak revealed, here is the real leaker of Valerie Plame,… Joe Wilson!

Via Wizbang the Who’s Who entry of Joseph Wilson and wife Valerie Plame.
Glenn Reynolds says it best:

Over three years of the press hyperventilating about nothing. And, I might add, pretty obviously nothing. But it served its goal, which was to drive Bush down in the polls, so I don’t think the hyperventilators regret it much.

So true!… Tom Maguire gets more detailed in his analysis.