“The Italian contingent is going back. The mission is accomplished — the security of the province is in your hands.”

The BBC has a video of this historic event, HERE.

British troops handed over control of the southern province of Muthana to Iraqis in July.

Italy on Thursday formally completed its military mission in Iraq and handed over responsibility for security in the Dhi Qar province to Iraqi forces. (ANSA)

The Iraqi Government took over control of security in Dhi Qar, its second province out of 18, today from Italian forces in a handover ceremony:

The Government of Iraq took control of the southern province of Dhi Qar today. The change demonstrates the ever-expanding capabilities of the new democracy, and places Iraq another step closer to full self governance. 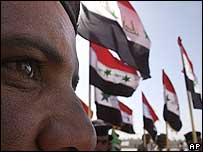 Major Gen. Kurt A. Cichowski, a deputy chief of staff for Multi-National Force – Iraq, said there are four key conditions to determine a province’s eligibility for transfer: the capability of the Iraqi security forces, threat levels in the province, local government capacity, and the provincial government’s relationship with Coalition forces.

“We are always in that process … of evaluating the four areas in all of the provinces. When the conditions are met for the provinces in the remaining areas then they will transfer too,” Cichowski said.

The responsibility for Dhi Qar’s transfer was mostly handled by the Italian contingent there, led by Brig. Gen. Carmine De Pascale, commander of the Italian Joint Task Force – Iraq.

“This result was attained by Dhi Qar provincial authorities and Coalition forces through a long and intense period of sacrifices and efforts,” De Pascale said.

A task force of about 1,500 Italian troops, along with Romanian, Australian and some British Soldiers worked closely with the local government in the province – training and equipping the local Police and Army, mentoring government officials, and organizing construction projects like schools and clinics.