A Somali cleric associated with the Islamist movement in that country has called on Muslims to “hunt down and kill” Pope Benedict XVI for his comments about Islam adn violence.

Meanwhile…
Four churches were attacked in the West Bank yesterday by radical Muslims outraged at the Pope’s remarks on Radical Islam. 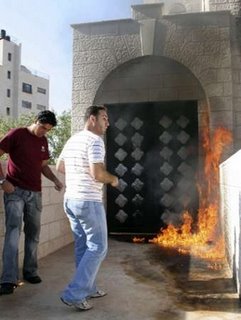 Palestinians look at a fire at the gate of an Anglican church after it was hit by a firebomb in the West Bank city of Nablus September 16, 2006. (Reuters)

The Pope’s apology is not enough for some Muslims outraged at his remarks on Muslim violence.

Another Indian cleric threatened the Pope with “devastating results” if he did not apologize.

Communists joined the protests against the Pope in Uttar Pradesh, India. 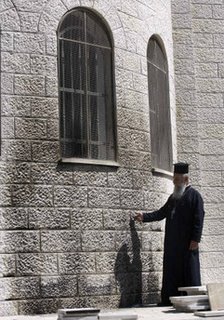 Palestinian Greek Orthodox priest George Awad views black scorch marks on the walls of his church after it was hit by firebombs in the West Bank city of Nablus September 16, 2006. Unknown assailants threw fire bombs at two churches in Nablus, following a day of protests against comments Pope Benedict made about Islam. (REUTERS/Abed Omar Qusini)

The Vatican has bumped up security.

At least… One church was attacked in Basra Iraq overnight. 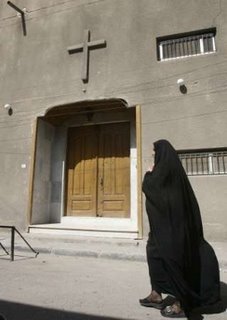 An Iraqi woman walks outside the Syrian Catholic church, which was attacked overnight in Basra, south of Baghdad, September 16, 2006. (Reuters)

IraqPundit has more thoughts.
Wasn’t this the Pope’s whole argument?

Update: Make that 5 churches torched in Gaza… still waiting to here on Egypt.