Not everyone in Pakistan believes that the oppressive Islamic Hudood Laws should be repealed.

The laws demands that a woman after her rape is required to prove that she was subjected to the rape by gathering 4 witnesses to the crime…
Not likely!

Surprisingly, not all Pakistani women are supportive of the changes. 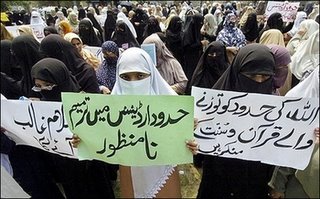 Female activists from Pakistan’s main fundamentalist party Jamaat-i-Islami, march in protest against amendments by the government to the country’s Islamic laws, ‘Hudood Ordinances,’ on rape and adultery during a rally in Lahore. As Pakistan’s President Pervez Musharraf tries to push through changes to Islamic rape laws, a groundbreaking television series has been credited for helping to open up the issue.(AFP/Arif Ali)

Thousands of women have been imprisoned or tortured under the Hudood Laws.
The Women’s Commission & Hudood Ordinances reported:

Under the old law women could not be convicted of adultery. Since the law made women culpable, thousands have been imprisoned under the Hudood laws.

A very large number of women have been tortured, molested and raped by the police with impunity. From 1980 to 1987 the Federal Shariat Court alone heard 3399 appeals of Zina involving female prisoners. This is only the tip of the iceberg, given the number of women arrested and released before reaching the appeal stage. Once a woman is accused of Zina she stands stigmatized regardless of subsequent acquittals.

This picture needs no caption. 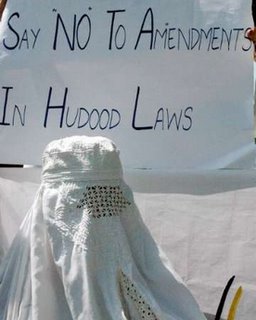 A woman supporter of the Jamat-e-Islami (JI) party attends a protest against the government’s attempts to amend Islamic laws in Peshawar August 26, 2006. (REUTERS/Ali Imam)

A few men showed up to show their support for the old system. 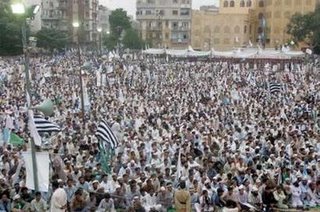 Supporters of the opposition Islamic alliance Muthidda Majlis-e-Amal attend a rally in Karachi August 27, 2006. Muthidda Majlis-e-Amal held the rally to launch a protest campaign against proposed amendments to Islamic laws. Liberals have long criticised the laws as being unfair to women. (REUTERS/Athar Hussain)

And, any protest is a good time for BDS (Bush Derangement Syndrome)… Of course, it is all George Bush’s fault that the Pakistani government is passing laws to put a stop to violence against women… as if that is a bad thing! 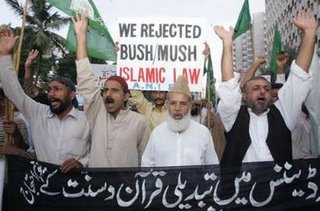