It’s gone beyond just death threats…
Now, Radical Islamists are demanding that the 79 year old Pope be nailed to a cross! 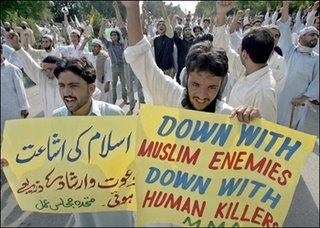 Hundreds of Pakistani Islamists held street protests to condemn Pope Benedict XVI for remarks they regard as anti-Islamic, with one leader saying the pontiff should be crucified.(AFP/Farooq Naeem)

After Friday prayers the protesters gathered in the streets of Karachi where one speaker said that the Pope will be crucified if he makes a trip there anytime soon:

Demonstrators Friday poured out of mosques after the main weekly Muslim prayers in Pakistan’s largest city Karachi, the eastern city of Lahore, the capital Islamabad and other urban centres.

“If the pope comes here we will hang him on the Cross,” Hafiz Hussain Ahmed, a senior leader of Pakistan’s main alliance of radical parties, told around 200 noisy demonstrators in Islamabad.

The alliance, called the Muttahida Majlis-e-Amal or United Action Front, forms part of the parliamentary opposition and is often heavily involved in street protests in mostly Muslim Pakistan.

The upside-down sign reads, “Jihad is Our Way!”… No kidding! 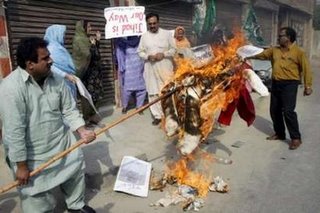 Supporters of the Pakistan Muslim League party burn an effigy of Pope Benedict to protest against his remarks about Islam, during a demonstration in Multan September 21, 2006. European Union countries should take ‘very seriously’ the threat to Pope Benedict after his comments on Islam sparked outrage in the Muslim world, the EU’s top security official said on Thursday. (REUTERS/Asim Tanveer)

Here is a picture of Hafiz Hussain Ahmed from an earlier peace venture to India:

California Conservative wants to know, “Are we ignorant, or are they violent?”