The Senate Intelligence Committee released a report from 2005, on Friday:

The report discloses for the first time an October 2005 CIA assessment that before the war, Saddam’s government “did not have a relationship, harbor or turn a blind eye toward” al-Qaida operative Abu Musab al-Zarqawi or his associates.

You would think the senators would remember this…
The current Al Qaeda leader in Iraq, Abu Ayyub Al-Masri, who after the fall of the Taliban, escaped to Iraq and set up terror camps with the Jordanian-born Zarqawi.

Hey Senators!… Remember this guy?… Al Qaeda #1 in Iraq… Who has been operating in Iraq since the fall of the Taliban in Afghanistan? 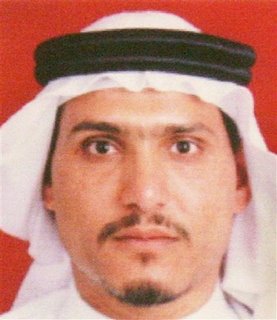 Al-Qaeda in Iraq leader Abu Ayyub Al-Masri took charge of operations in southern Iraq after the Allied invasion of Afghanistan.

Al-Masri just released an audiotope this week threatening US and Iraqi soldiers.

Al-Masri – which means “the Egyptian” – is another foreign fighter who trained in Afghanistan like Zarqawi, coalition officials said. No one knows his real name.

The terrorist is said to be about 38 years old and got his beginning in Egypt, where he joined the Islamic Brotherhood. He fled from Egypt and moved to Afghanistan, where he trained in explosives at the al-Faruq Al Qaeda camp. There he met Zarqawi, officials said.

After the fall of the Taliban, Masri escaped to Iraq and set up with the Jordanian-born Zarqawi. The Egyptian specialized in vehicle-borne improvised explosive devices. He helped establish the Baghdad cell of Al Qaeda in early 2003, officials said.

Later he worked the “rat line” down the Euphrates River Valley supplying suicide bombers via Syria. Officials said he probably directed that operation from Fallujah.

A. Jacksonian has much, much more on the translated Saddam documents…

Jason Smith has more on the Monday Morning Hypocrites

The RNC has a posting on how the democrats conviently forgot what they said only months ago.