At UN headquarters, the slaughter in Andijan is long forgotten after one year.
UNESCO, who supposedly “functions as a laboratory of ideas and a standard-setter to forge universal agreements on emerging ethical issues,” awarded Uzbek President Islam Karimov an award one year after he slaughtered hundreds of his people in a public square. 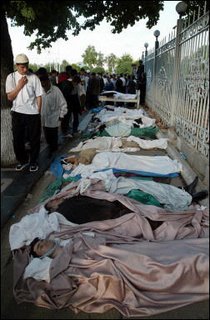 Friends and family look for loved ones among the dozens of dead after the Andijan slaughter by government forces in May, 2005. (Internet Ouzbekistan)

One year after Uzbekistan President Islam Karimov massacred up to 1,000 protesters at a public rally in Andijan, UNESCO decides to give the tyrant an award!
The BBC reports:

Mr Karimov has been condemned by the UN for a bloody crackdown in May 2005.

Human Rights Watch, Freedom House and Paris-based Reporters Without Borders have all expressed their concern at the award, which Unesco said was in recognition of Mr Karimov’s preserving his country’s cultural heritage.

FYI- “UNESCO contributes to peace and security in the world by promoting collaboration among nations through education, science, culture, and communication.”
Yeah, right!

The Registan has much more on this UN shocker. 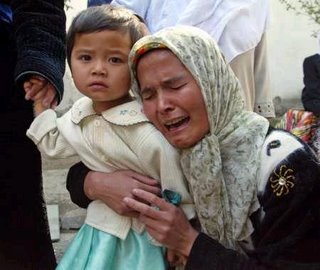 A young mother mourns at the funeral of a loved one after the slaughter in Andijan, Uzbekistan. (Internet Ouzbekistan)

This was the scene just moments before the massacre… 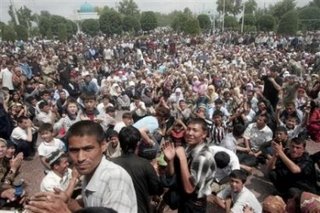 Women, children, families were in attendance at the rally before government forces under the direction of President Islam Karimov surrounded the rally and opened fire on the masses. (Transparent Grid)