The Political Pitbull has the video and transcript of Patrick Leahy’s rant on the Senate floor on Thursday September 28, 2006, comparing American practices to that of the Taliban, Saddam’s Hussein, or characters “in the fiction of Kafka.”

Sister Toldjah says this isn’t the first time we heard this line from a democrat.

AllahPundit has a roundup of the nutroots reaction to this piece of legislation on America’s treatment of terrorist detainees who want to blow up babies.

** And, where fathers and their 4 year-old sons sit together and assemble IED’s (Video 53 seconds)

No, Senator Leahy, America is not a Taliban State! 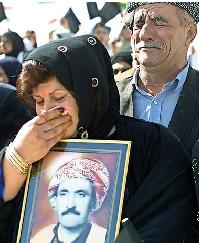 And, Senator Leahy, America is not Saddam’s Iraq, either!
(WaPo)

Danegerus has more real torture and says, “Any Republican that doesn’t use this in the election deserves to lose.”

In the words of Vice President Cheney to Leahy back in ’04…
Nah, I wont go there.

Surprise! The ACLU is condemning the action.