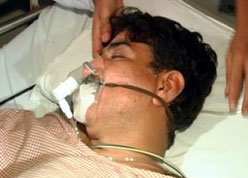 A protest originally organized against Pope Benedictus ended early after Muslims turned on each other hurling bottles and bulbs:

A protest in Delhi against the Pope’s controversial comments on Islam and Prophet Mohammad turned ugly on Friday evening when those protesting turned against each other.

In the ensuing melee – protestors hurled bulbs and bottles at each other – Delhi Assembly’s Deputy Speaker Shoaib Iqbal was also attacked.

Soon, the Friday prayer gathering turned into a duel between Imam’s army and Iqbal’s supporters.

“He is a cheat and only thinks of money,” Iqbal said.

Hours after issuing that statement, he was gasping for breath at a Delhi hospital for haiving said too much in the Imam’s territory and annoying his already pumped up supporters who felt the speakers presence at the Jama Masjid undermined the Imam’s authority.

The protest was held outside one of the largest mosques in New Delhi. 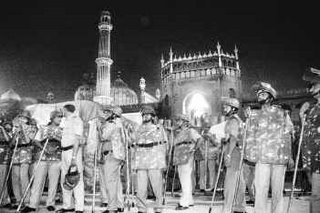 Delhi Police personnel in anti-riot gear were deployed outside the Jama Masjid after clashes between two Muslim groups in New Delhi on Friday. (The Hindu)

The Anchoress… “Perhaps some will look at the spires of their great cathedrals and wonder if they really want to see them replaced with minarets.”

Meanwhile… The moral superiors at the New York Times have asked the Pope to apologize to Muslims for his lecture on Muslim violence that has caused Muslim rioting and church burnings.