We will know the world is winning the War on Terror when: 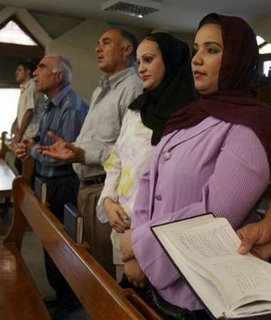 Iraqi Muslim women join other Iraqi Christians during Sunday mass at a Roman Catholic church in Baghdad September 17, 2006. Iraq’s government called on Muslims on Saturday not to attack the country’s small Christian minority in response to remarks by Pope Benedict that have angered Muslims. (REUTERS/Mahmoud Raouf Mahmoud)

We will also know that we are winning the War on Terror when we can join with our brothers and sisters and support one another in truth and without fear.

The following is a Haider Ajina translation of a headline and article from the Iraqi Zahrira News Network (Ashirina) published on September 18th.

To show patriotism, true brotherhood and affirm the bond of belonging to one Iraq, which goes beyond religion or sect, a group of Iraqis (Christian and Muslim) attended a special service in the Roman Catholic church in Baghdad on Sunday the 17th of September. Muslims shared with Christian Catholics their prayer for almighty to clean the hearts and pray for unity. This came after increased anger by some Iraqi Muslims at statements made by the Holy Sea.

As to the official response from the Iraqi government, Dr. Ali Al-Dabagh, official spokesperson for the government in Iraq called on Iraqis to exercise restraint and act wisely in response to statements by the Vatican Pope, in which he criticized Islam. Al-Dabagh said in a press conference, “The Iraqi government asks all who love God’s prophets and messengers to not act in a way which would harm our Christian brethren. They are our partners in this nation and are not to be judged by the statements of the Pope. The problem is that the Pope attributed behavior of some Islamic leaders of a certain era in history with Islam and its beliefs. If we were to look back in history, we will also find Christian leaders who committed crimes in the name of the cross. We do not hold Christians responsible for these actions since they were crimes of singular deviant leaders. What is needed now is an international agreement to punish all who insult God’s religions.

Here we have an Ashurian Christian paper carrying news about Muslims and Christian Catholics displaying brotherhood and showing they are children of one nation. Very few countries have had Christian, Muslim & Jew living side by side for over 1300 years. Sadly, many Jews had to flee Iraq in the late 1940s. While memories run very, very long in the Middle East, so does the knowledge that every one has to live together and benefit each other. The turmoil in that region does not show this however, any one who has been there and spent time amongst the people and lived amongst them knows this.

Most Muslims in the Mid-East and Central Asia live under oppression (Pakistan included). They live in fear of their governments, their religious leaders and the religious fanatics. While they may be able and free to pursue their daily activities and livelihood, they live in fear. This fear is oppressive to mind and soul. One stops thinking logically and tends to follow the crowd for safety, hence the mass demonstrations and overreaction. It is one of the few mass actions allowed, and, in some cases, called for by these oppressive governments. These out bursts and demonstrations are also called for by religious leaders trying to show the government that they also have power.

The youth of the Iraqi democracy and rule of Law in Iraq is well evident by Al-Dabagh calling for punishing those who insults God’s religions. To me this on its own can be a form of oppression. I understand, however, why he is calling for this punishment. It is to appease the overly zealous Muslim leaders. Freedom of speech is protected in Iraq, but the line is drawn when it comes to insulting God’s religions. I wish to see this kind of statements from the Iraqi government when Christianity or Judaism is insulted. Time will tell.

The Anchoress shares her thoughts and concerns on this hopeful message.