Angela Merkel warned against bowing to the fear of Muslim violence today. 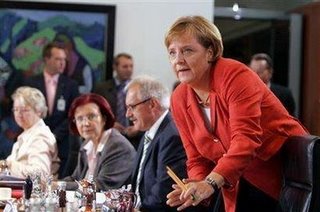 Chancellor Angela Merkel condemned the censorhip out of fear by the cancellation of Mozart’s Idomeneo in Germany today.

“We must take care that we do not retreat out of a fear of potentially violent radicals,” she said.

She was speaking after the Deutsche Oper in Berlin decided to call off November’s production of Idomeneo, citing “incalculable” security risks.

He hosted the conference on Wednesday – the start of a two-year campaign for improved integration of Muslims in Germany, most of whom are of Turkish origin.

He told the German newspaper Sueddeutsche Zeitung that Muslims in Germany had to accept European norms and values.

Mr Schaeuble wants their imams to be educated in Germany rather than Turkey.

With 3 million Muslims in Germany, out of 84 million, and with a terror attempt last month on the trains, the play was called out of fear.

Merkel last week also stood up for the Pope saying he was misunderstood.

Michelle Malkin has more on this and other cancellations.