“We lied throughout the last year-and-a-half, two years. It was totally clear that what we are saying is not true. We lied to win!”

The ruling Socialist Party members lied for a year and a half about the condition of the economy and were caught discussing it on tape!
BBC has the video HERE.

The Prime Minister admitted the lie and posted it on his blog!
Via Wikipedia

Now the Hungarians are rioting and demanding the Prime Minister resign! 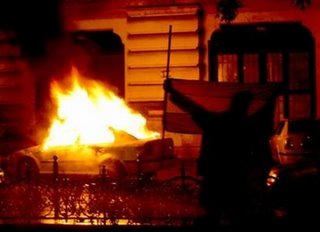 A protester holds a Hungarian flag in front of a burning car during a rally in front of the state television building in Budapest September 19, 2006. (Laszlo Balogh/Reuters)

Here is the actual discussion that was recorded on the leaked tapes:

“There is not much choice. There is not, because we screwed up. Not a little, a lot. No European country has done something as boneheaded as we have. Evidently, we lied throughout the last year-and-a-half, two years. It was totally clear that what we are saying is not true. You cannot quote any significant government measure we can be proud of, other than at the end we managed to bring the government back from the brink. Nothing. If we have to give account to the country about what we did for four years, then what do we say?”

Gyurcsány admitted that he didn’t disclose “the details of the truth”, but said that he has not lied. Huh?

HappyCrow has a terrific roundup on the action in Budapest. 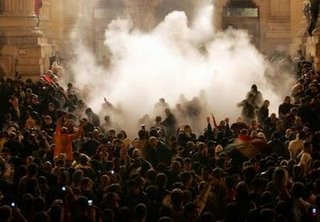 Hungarian riot police use teargas against anti-government protesters front of the state television building in Budapest September 19, 2006. Hungarian police clashed with protesters demanding the resignation of Prime Minister Ferenc Gyurcsany on Monday in the first such violence since the fall of communism and establishment of democracy in the late 1980s. The protests were sparked by the leak of a tape in which Gyurcsany admits he had ‘lied in the morning and lied in the evening’ about the government’s record to secure re-election in April. (REUTERS/Karoly Arvai)

At least 50 people are hurt in the protests as police fired tear gas on the stone throwing crowd in Budapest. 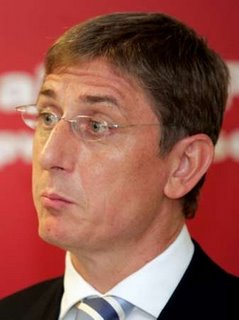 Hungary’s Prime Minister Ferenc Gyurcsany speaks to reporters after a socialist party faction meeting in Budapest September 18, 2006 as anti-government protesters called Gyurcsany to resign. Gyurcsany, in a taped speech to party insiders which was leaked to the media on Sunday, said that his party and government had lied to win April’s election. (REUTERS/Karoly Arvai)

Prime Minister Gyurcsany says he will not step down and Leftist members of Parliament have voted unanimously to support him!

These are the first major Hungarian riots since the fall of communism in the 1980’s. 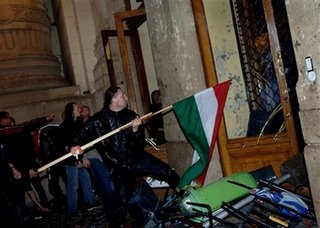 Right-wing demonstrators storm the headquarters of the Hungarian State Television during an escalating protest against Hungary’s socialist government in Budapest, Hungary. (AP)

The Prime Minister may lie about the economy but he sure enjoys dancing to the Pointer Sisters!
YouTube Video HERE!

Update: The Prime Minister says he will clamp down on any more violent protests that break out in the country.