Getting religion… This Leftist calls the Pope a “racist” for his remarks on radical Islam.

** They’re winning back the Christian block one voter at a time over at the Huffington Post today! ** 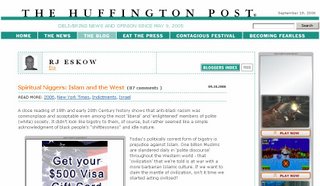 This I had to copy because it could be pulled any Leftist second.
Click to Enlarge

The Leftists at HuffPo kill two (three) birds with one stone…
Not only do they show they have no concept of the threat that we are under, but they attack the hated Christians, Catholics, and throw the “N-word” out there just to prove that the black vote is theirs, baby!

Today’s new Liberal low at the HuffPo is brought to you by RJ Eskow:

A close reading of 19th and early 20th Century history shows that anti-black racism was commonplace and acceptable even among the most ‘liberal’ and ‘enlightened’ members of polite (white) society. It didn’t look like bigotry to them, of course, but rather seemed like a simple acknowledgment of black people’s ”shiftlessness” and idle nature.

Today’s politically correct form of bigotry is prejudice against Islam. One billion Muslims are slandered daily in ‘polite discourse’ throughout the Western world – that ‘civilization’ that we’re told is at war with a more barbarian Islamic culture. If we want to claim the mantle of civilization, isn’t it time we started acting civilized?

The Pope’s speech is the most prominent example of the week and, while it’s not the only one, it’s a good place to start. I read both the speech and the so-called ‘apology’ carefully…

As I pointed out elsewhere, less than one Muslim in 43,000 has ever joined a public demonstration or reacted violently against anti-Muslim statements, whereas one American Catholic priest in 20 has been accused of molestation (and protected by his Church.)… And the Pope was not the only person spreading prejudice this week.

In other words, despite the fact that people are now spitting on Muslims in the streets of Denmark and burning their mosques in the US, it doesn’t matter…

Muslims are one billion human beings, rich in complexity, beauty, and humanity. A few of them are haters, as in every religion. But those who would diminish them, look down on them, turn them into the “n*ggers” of the world, don’t just degrade Muslims. They cheapen us all.