Iraqi President Talabani also reminded the world in his UN speech Friday of the great strides Iraq has made within the past year on the road to democracy:

During the last year, parliamentary elections were held for the first time electing a Transitional National Assembly, followed by a national referendum for a permanent constitution for the first time in the history of modern Iraq. A second election was held on December 15, 2005, which chose a Council of Representatives for a period of four years that convened on February 1, 2006.

Behind the drama at the UN, this story was hidden from view this week… 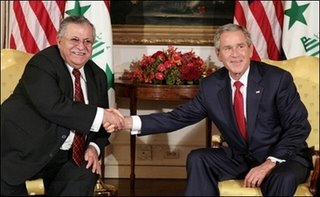 As I am visiting the United States for the second time representing free and democratic Iraq, I felt it my duty to give you an update on what has been achieved in Iraq over the past year and on the challenges that lie ahead.

The first thing I would like to convey is the gratitude of all Iraqis, who are fighting for a democratic government and a civil society, to the Americans.

Without your commitment, our struggle against despotism could not have made the progress that we have achieved. No expression of thanks could be enough for those who lost loved ones in Iraq. We feel your pain, we honor your sacrifice and we will never forget you.

To those of you who have family and friends in Iraq today, we say: Your sons and daughters are helping us through a historic transition. We will always remember the enormous sacrifice that America is making for Iraq.

Thanks to the United States, we are transforming Iraq from a country that was ruled by fear, repression and dictatorship into a country that is ruled by democracy and has the values of equality, tolerance, human rights and the rule of law at its heart.

April 9, 2003, the day of liberation, heralded a new era in the history of Iraq and the region. That day triggered a sequence of events that laid the foundation of a modern Iraq that is at peace with itself and the world.

All segments of Iraqi society have benefited from liberation. Under Saddam Hussein, the majority of the Sunni Arabs of Iraq were marginalized, Saddam and his gang were ruling in the name of this community. But in reality, the Sunni Arabs never had the chance to choose their representatives democratically and have a say about their future. Today, they have 58 deputies in Parliament, a vice president, a deputy prime minister and a speaker of Parliament; all were elected by the people of Iraq.

…The battle in Iraq today is not between the various communities. Their elected representatives have agreed on a government of national unity and on national reconciliation. Nor is it a battle between civilizations, as some have seen it.

It is a war “about civilization” as Prime Minister Tony Blair has phrased it so well – the conflict is between those who believe in having a civilization and those who don’t believe in having one at all. As you no doubt already understand, we are fighting a terribly difficult war in Iraq. We are doing everything within our power to protect our people from this clear form of fascism that seduces them into civil war.

The calculated crime of Abu Musab al-Zarqawi and his henchmen in bombing the Shrine of Samarra, one of Iraq’s religious and cultural treasures, is a prime example of their agenda. They wanted to slide the country into civil war.

Thanks to the presence of the U.S. forces in Iraq and the wisdom of my colleagues in the leadership of Iraq, that plan was thwarted and the short spate of violence was contained.

There is much more in his gracious letter to America. I agree with Iraqi-American Haider Ajina, read it all!

And, here is a very interesting article at Pajamas Media on the embedded reporters working in Iraq.